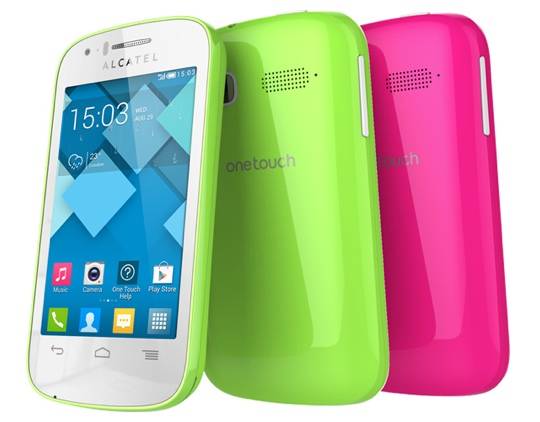 We have already seen a few device announcements coming out of IFA from Alcatel. And as of today it looks like another has arrived. This latest is dealing with the One Touch Pop series of smartphones. Essentially, Alcatel has refreshed the POP series of smartphones. The newly updated One Touch Pop lineup will be arriving with Jelly Bean and it consists of the C1, C3, C5 and C7.

The Pop C1 is touted as being “perfect for any pocket.” Playing off the size, this one will be sporting a 3.5-inch display with a resolution of 480 x 320. The C1 will be powered by a dual-core 1GHz processor and equipped with 512MB of RAM, 4GB of internal storage, microSD card slot, 1300 mAh battery and a 2 megapixel rear-facing camera.

Stepping over to the Pop C5 and we find a device that will be sporting a 4.5-inch display with a resolution of 854 x 480. The C5 will have a dual-core 1.3GHz processor with 512MB of RAM, 4GB of internal storage and a microSD card slot. Other goodies for the C5 will include Android 4.2 along with an 1800 mAh battery, VGA quality front-facing camera and a 5 megapixel rear-facing camera.

Last up is the Pop C7. This one will be have a 5-inch (854 x 480) display and quad-core 1.3GHz processor. The C7 will also have 4GB of storage, a microSD card slot, 512MB of RAM and 2000 mAh battery along with a VGA quality front-facing camera and 5 megapixel rear-facing camera. Similar to the other devices in the Pop series, the C7 will be running Android 4.2.

That all being said, Alcatel has yet to offer anything in terms of prices for any of these Pop series devices. As for availability, the C1 and C3 should arrive in October, the C5 is set for November and the C7 has a more general timeframe of sometime during the fourth quarter of 2013.