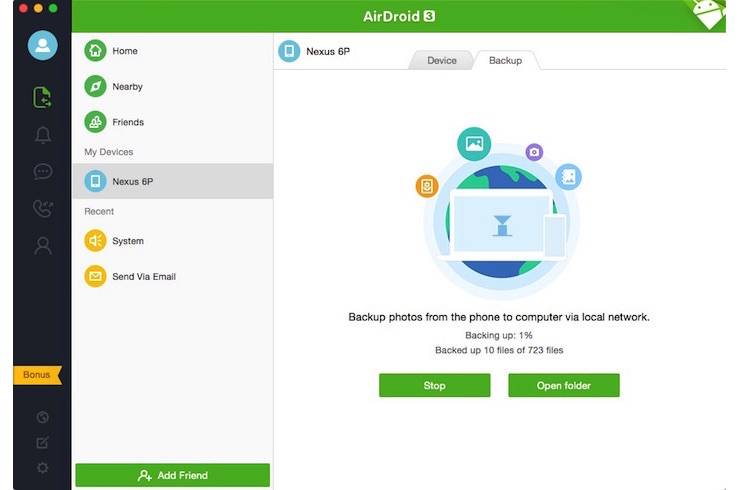 AirDroid has been around since 2012 making our digital and mobile lives more conenient. Since moving to the cloud is the trend now, the team behind AirDroid is launching a new feature in the app that brings cloud service to the loyal users. Aptly named as ‘Backup’, this feature is another cloud backup solution that is similar to Dropbox and Google Drive.

Relying on the cloud is actually more than just the “in” thing to do. It’s a necessity that we all must embrace because as technology advances, files will only get bigger. Mobile devices are only made with enough storage capacity so you have to think twice if you want to save a file or download an app. Always check the file size first so you’ll know if it will take up most of your precious storage space.

AirDroid’s Backup is developed mainly for the photos in your smartphone. The feature allows easy backup and transferring of those photos from the phone to a computer that’s connected to a local network. What Backup does is to automatically transfer photos directly to your computer. No need to attach a cable from your device to a laptop because AirDroid will connect via a local network.

The process is safe, fast, and automatic. It’s also stable and reliable because it’s through a local connection. Photos are guaranteed private and secure because they won’t pass through AirDroid servers and won’t be out there in the web.

If you’re the type of person who always forgets to backup photos on your phone, there’s the automatic backup option. It’s perfect because you don’t have to worry about when or where to save all those photos because AiDroid will do the job for you automatically. You can even set it to do the backup at a certain battery level percentage or “only when charging”.

Make sure you have both the desktop and mobile versions of AiDroid. The latest desktop client is already v3.3.1 while the Android app should be updated to v3.2.1.