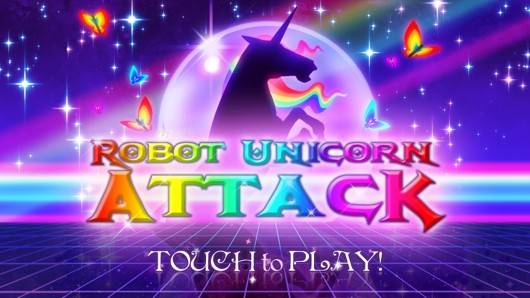 Nickelodeon’s popular Adult Swim division is testing the waters by releasing their first Android app, a game called Robot Unicorn Attack. The app will sell for $1 and have Open Feint Support. But the good news is, that if the sales of the game go well, Adult Swim will then port “Heavy Metal” and “Christmas Editions” of the game to the Bot from iOS. Currently, both are only on iOS platforms and have been selling very well.

“We’ve gotten a lot of requests for our games on Android,” said Jeff Olsen, VP of Adult Swim Digital and Games. “”We’re starting with Robot Unicorn because we’ve seen the most call for it. If it performs well, we’ll look at our whole catalog and bring over our other top titles.”

That means users will likely see Adult Swim’s other top-performing games come to the Android Market. Popular titles like Amateur Surgeon and Five Minutes to Kill (Yourself) have been very popular on the iTunes App Store and will likely be next down the pipeline. In addition, there’s plans to also launch the signature Adult Swim app on the Android platform next month. The Adult Swim app will allow viewers to watch episodes and clips of Robot Chicken, the Venture Brothers and Aqua Teen Hunger Force, staples on the Nick at Night channel.

Adult Swim has enjoyed over a million downloads through the iTunes app store and it’s sure to make a splash in the Market Place where there’s a wider array of users to ply their wares. And Adult Swim is singularly focused on the mobile market, with plans to experiment on multiple platforms, with Android being the first. If users don’t have access to an iPhone and want to check out Robot Unicorn Attack, they can play a free Flash version at AdultSwim.com or on Facebook.