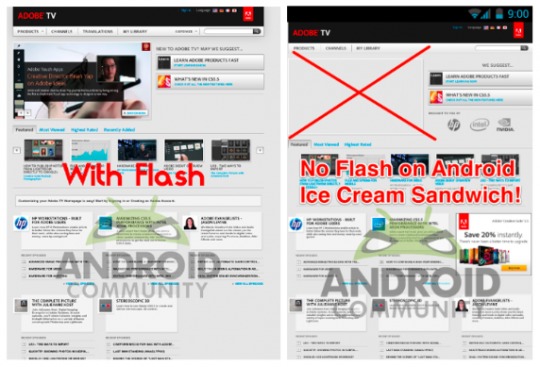 We have already talked about the fact that there was supposed to be no Flash support for Android 4.0 Ice Cream Sandwich. Adobe has now announced that it will be offering Flash for ICS after all. There is a catch though; Adobe has noted that ICS will be the last supported Android OS for Flash. That means all future version of Android will have to make it with no Flash.

Flash for Android 4.0 is expected by the end of the year. The company will continue to offer patches and security updates for existing versions of Flash after the Android 4.0 version is offered. This will get all the folks planning to get a Galaxy Nexus that lacks Flash support for content using flash.

Once those Android 5.0 handsets start to hit, Google will need to move to HTML 5 support or work something out on its own for Flash support. Android 5.0 is thought to be called Jelly Bean. That name is unconfirmed at this point.