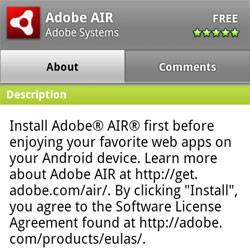 Adobe AIR is the cross-platform application system that we heard about earlier this year with plans for a Q4 release. After seeing some demos and hearing word of coming applications it has now been released on the Android platform.

This opens up a whole new way for apps to get ported to Android, without any coding at all if the application is built on the AIR platform. As seen in the video below, you can see an AIR app running on Mac, Windows, Linux, Android, and iOS both on an iPod Touch and iPad. This is all done without any change in code.

The download itself is just the runtime, so use to the end user is not quite there. New applications will be available to download directly from the Android Market. This opens up a whole new way for developers to publish apps. Working on only one set of code they can truly release their application cross platform.