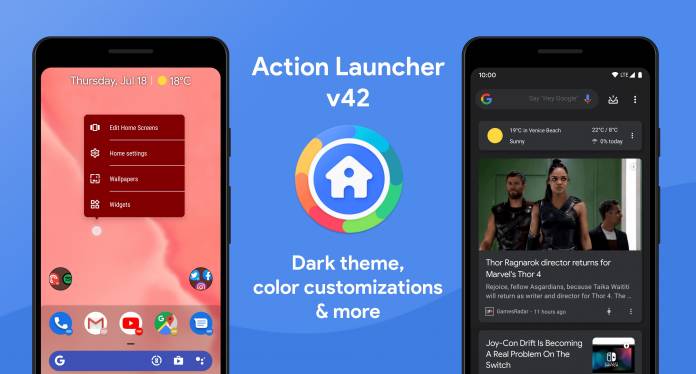 If you’ve been using Action Launcher as your phone’s official launcher or you’ve been looking for one to try out, the latest update should make you happy or curious, respectively. Version 42 of the app and service brings you even better and deeper theme enhancements as well as improvements to the integration with Google Discover and its own digital wellbeing app ActionDash. If you’re looking for themes and color customizations from a launcher, then this is something worth checking out.

Version 42 of the app brings full theme support so you will be able to choose between light, dark, and full black themes. This includes not just the app settings but the home screen itself oc course. Since dark themes or options are now the in thing with a lot of Android users, this should be able to attract new users especially since a system-wide dark mode is still not here and may come with Android Q, which should take a few months or even a year for some.

One of the popular features of the Action Launcher is QuickTheme which will automatically adjust home screen elements including the search box, folder background, and app drawer so that it will match your current wallpaper. The update brings some improvements namely the ability for custom color selection as well as color-matching with the current theme. There are endless possibilities with what colors and themes you can mix and match here.

Google Discover integration has been improved with the update so your feed can actually match what you chose as your theme. And since ActionDash has received an update itself, you will also be able to add new features like focus mode and app usage limits. What Action Launcher does is to enhance the integration by having a shortcut so you can go to usage status for a specific app quickly. It also now grays out app icons if you’ve blocked them through focus mode or you’ve already exceeded your daily usage limit.

You can now update Action Launcher from the Google Play Store to version 42. If you haven’t tried it out yet, now’s a good time as any.