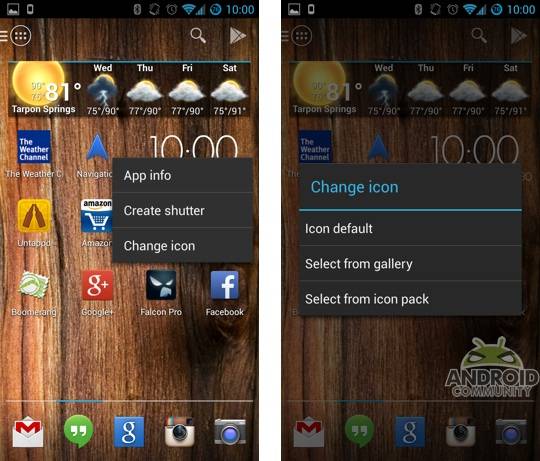 Action Launcher has recently been updated and while this one may not be considered a huge update by everyone, it did provide some worthwhile new features, changes and improvements. To begin with, those using Action Launcher will now be able to hide the notification bar. This option is hidden away in the Labs section, which does mean it is still considered experimental.

That aside, this can be found by navigating to the Action Launcher settings and tapping the Labs section. Once here just uncheck the box next to Show Notification Bar and it will disappear from view. And just to clarify things here, it was said that this means that you will no longer be able to access the bar by swiping down from the top of the screen.

Another notable change here comes in with the app icons. A long press on any icon previously offered options for info and the shutter, however as of today you will see a third listed as “change icon.” Tapping that will then allow you to change the icon to default, select something from the gallery or to pick one from an icon pack. Simply put, you now have plenty of options when it comes to customizing individual app icons.

Some of the other items included on the changelog mention how the base code was updated from Android 4.1 to Android 4.3 and how the dimensions of the Home screen pages are now calculated dynamically. This basically means the app should display properly on device of all screen sizes. Action Launcher users now also have the option to import layouts from Trebuchet (CyanogenMod).

There was also mention of how boot times have been “massively improved” and how the lag that many saw when returning to Action Launcher from another app was experiencing has been reduced. Bottom line here, no new earth shattering features were included with this update, but it does seem like one that is worth grabbing sooner rather than later. As always, the latest build of Action Launcher can be found by way of the Google Play Store.