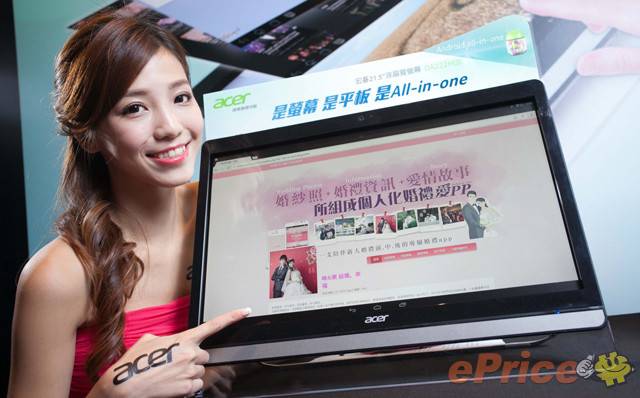 Jumping on the all-in-one or AIO train, Acer has just announced four new large flat screen computers. Unlike most AIO units however, these models from the company’s new Smart LCD Monitor DA and TA series all run a more or less recent Android OS.

One word that describes these screens is “huge”, despite Acer describing the smallest of them as being portable. The models mostly vary in screen size, though all except the largest one sport the same resolution. The Smart AIO displays all sport kickstands that can be adjusted to make the screens stand upright, tilted or lie flat, depending on the intended use case, which is intended mostly for POS or exhibits.

The DA222HQL has a display size of 21.5 inches and a resolution of 1920×1080 pixels. It runs on an NVIDIA Tegra 3 chip at 1.6 GHz and has both VGA and MHL video output ports. The DA223HQL has the same screen size and resolution but runs on a quad-core Qualcomm processor instead and only has MHL output. The DA233HQL also only runs Android 4.1.2 while the DA222HQL uses a more recent Android 4.2.2. The larger DA241HL has a 24-inch 1080p display that also runs on an NVIDIA Tegra 3 and uses Android 4.2.1. All three models sport only 1 GB of RAM. The higher-end TA272HUL, however, has 2 GB of RAM and runs on a more powerful NVIDIA Tegra 4. It also has the largest size, with a 27-inch screen and a 2560×1440 pixel resolution. It also runs a more recent Android 4.2.2 version. All four models from the Smart series are equipped with a 2 megapixel webcam and 16 GB of internal storage.