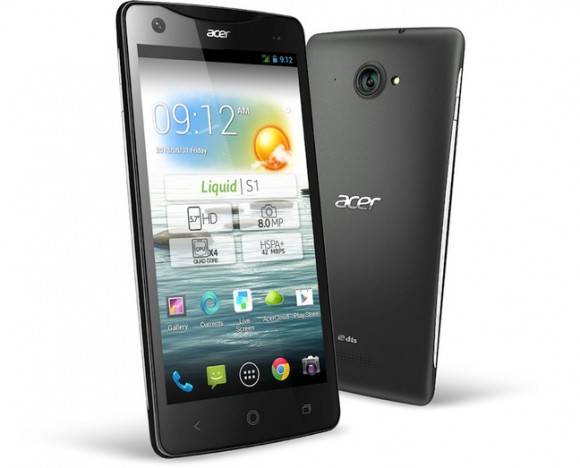 Acer has officially announced the Liquid S1, a device they are touting as a phablet. This marks the first such device for Acer and it will arrive sporting a 5.7-inch 1280 x 720 display and running Android 4.2 Jelly Bean. Acer is pushing the Liquid S1 as being the “new travel companion for professionals and adventurers alike” and that statement appears to be coming by way of some pre-loaded applications.

First though, the specs. Aside from a 5.7-inch display and Jelly Bean, the Liquid S1 will be powered by a quad-core 1.5GHz processor with 1GB of RAM, 8GB of internal storage, a microSD card slot, 2 megapixel front-facing camera and an 8 megapixel rear-facing camera with LED flash. The handset will also be sporting a 2400 mAh battery, which according to Acer will be able to provide “a day’s worth of battery power.”

Acer has also said the Liquid S1 will feature a design that is “ideal for assertive businesspeople and passionate explorers.” While we aren’t entirely sure how they came to that conclusion, further details on the exterior talk about how the handset will have a slender profile with aluminum side grips. The handset will also be available in two colors — matte black and white. In addition to Jelly Bean, the Liquid S1 will have the Acer Float User Interface which will allow for some multitasking.

This includes the Float Apps shortcut that will bring a translucent screen with shortcuts to the supported apps. Those apps include camera, maps, calculator and notes as well as a Float Caller notification. Some of the Acer specifics include Auto Profile and Voice Unlock as well as Wide Front Shot which means users will be able to capture wider and taller visuals. Plus there is also Voice Shot to capture images by saying cheese, Smile Shot to detect smiles in images and Studio Sound which should serve to improve the audio quality.

Acer will have the Liquid S1 available in a handful of markets to include Belgium, France, Germany, Netherlands, Ukraine, Russia, UK, Spain and Italy beginning in the third quarter of 2013. Also worth nothing, while Acer hasn’t specified which markets, they have said the Liquid S1 would have dual-SIM support in select regions. Lastly, the handset will be priced from €349.