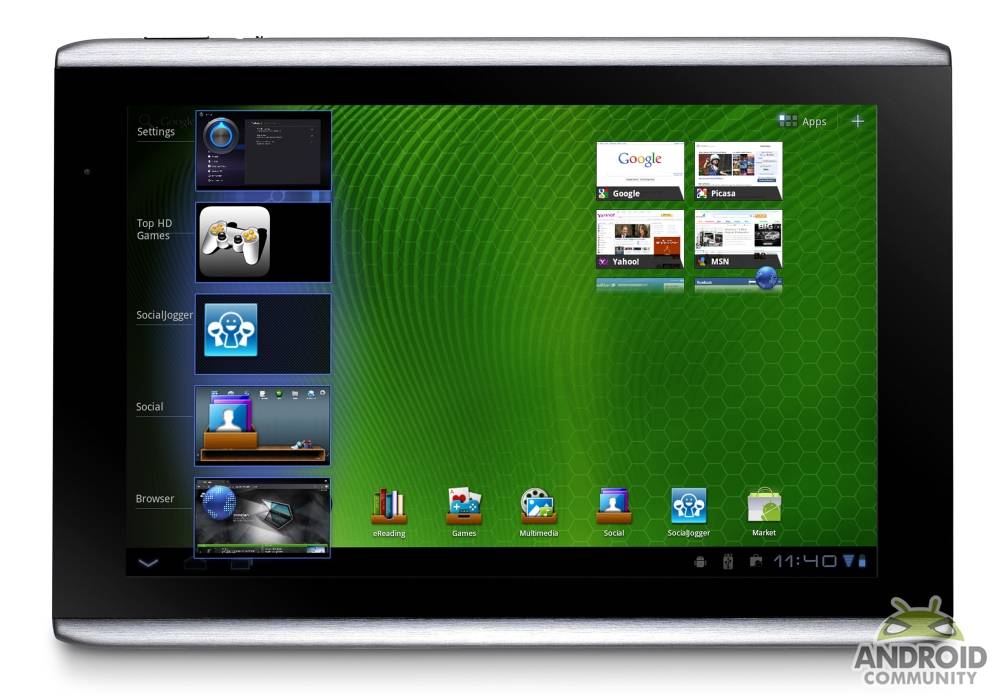 Our good friends at Acer have let us in on the official release of the Acer Iconia Tab A500, a 10.1-inch 1280×800 TFT WXGA tablet running Android 3.0 Honeycomb that’s available exclusively at Best Buy NOW for the price of $449.99. We got to peek at an early build of this wild device by chance back at a jumpin’ AT&T party during CTIA 2011, and it wasn’t really all that ready to go software-wise, but the hardware was silvery tight and fresh. Now we’ve got the full lowdown and it’s ready to be shared with the whole world.

This tablet has an “ultra” high-res widescreen that’ll be blowing your eyeballs out at HD 720p on the display or 1080p via it’s HDMI out port. Flash is fully supported out of the box. You’ll be ready to play at least the two full games that come with it, those being the lovley “Let’s Golf” and the sweet and sensitive “Need for Speed: Shift,” both of which are pictured below on the tablet. Certainly the entire suite of fantastically delicious HD games Android has to offer will be working on this monster as well as it features a NVIDIA Tegra 250 Cortex A9 1GHz dual-core processor and integrated GeForce™ GPU. Inside you’ll also find 16GB of flash storage, 1GB of RAM, and support for 32GB storage “planned for future models.” The Micro-SD card on this tablet also supports up to 32GB cards for your 3rd party app pleasure. 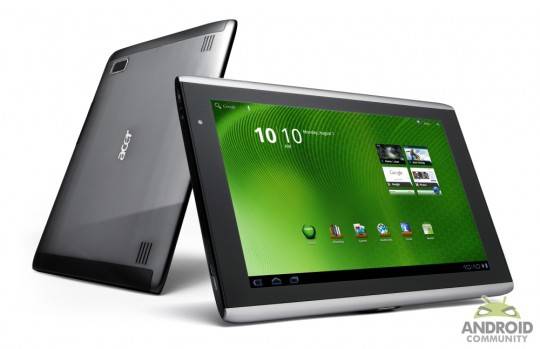 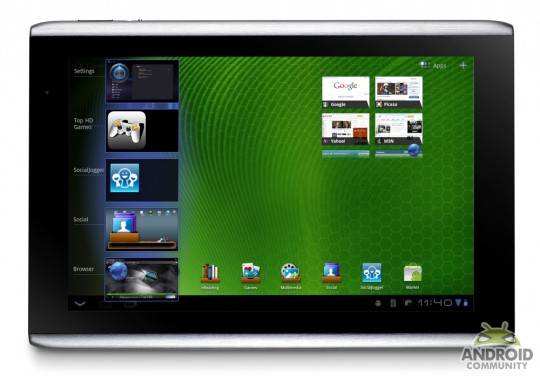 This tablet is 0.52-inches thin, making it sit in close contention with some of the thinner tablets on the market, and certainly no fatter than those already released (save the iPad 2, which is slightly smaller.) You’re able to purchase several accessories that’ll allow you to rock further, those bieng a full-sized Bluetooth keyboard for MSRP is $69.99 and a dock with IR remote for MSRP is $79.99.

Take a peek at the full details in the press release below:

The new Acer Iconia Tab A500 tablet enables customers to interact with and enjoy technology in ways that are both truly natural and exciting. The 10.1-inch multi-touch screen provides accurate finger-tip control for personal access to applications, games and entertainment. The tablet provides an enhanced level of performance with its NVIDIA Tegra 250 1GHz dual-core processor and integrated GeForce™ GPU that lets customers enjoy HD gaming, 1080p video and faster browsing, as well as running multiple applications and digital media playback at the same time.

Customers can take advantage of these capabilities with the new Android 3.0 (Honeycomb) operating system, which gives them the flexibility to customize their experience to suit their interests.

The Acer Iconia Tab A500 was built for usability on-the go. Its slim and modern aluminum design weighs only 1.69 pounds and measures only 0.52-inches thin. It also includes forward and rear-facing cameras for capturing videos and photos as well as video conferencing.

“Staying connected and entertained are firmly embedded as a part of our everyday lives – and the Acer Iconia Tab A500 does this and so much more in a performance-minded, sleek and stylish design,” said Sumit Agnihotry, vice president of product marketing, Acer America. “This tablet absolutely delivers on the expectation that customers can be entertained, stay in touch with family, friends, colleagues and social networks, as well as keep up on the world around them in a way that is intuitive and fluid, and also incredibly enjoyable.”

Best Buy’s vice president of computing, Jason Bonfig, stated, “Tablets are paving the way for people to enjoy a whole new form factor in entertainment and connection. We’re pleased to have Acer join our tablet selection and to offer our customers an opportunity to try this tablet out for themselves at any Best Buy store.”

Extraordinary Mobile Entertainment and Fun; Two Great Games Included
Navigating through the interactive environment with the touch of a finger-tip is incredibly natural. The 10.1-inch capacitive touch-screen tablet delivers a remarkable degree of accuracy and responsiveness. The high-resolution 1280×800 TFT WXGA display is crisp and clear, and provides an 80-degree wide viewing angle to ensure an optimal viewing experience. The large 10.1-inch size is ideal for comfortably accessing and enjoying a number of applications – from movies and games to social networks and scrolling through photos in the photo book application.

Designed for HD entertainment, the high-color contrast 10.1-inch widescreen display allows customers to enjoy exhilarating HD 720p video in a 16:10 aspect ratio. Customers can also use the Acer Iconia Tab A500 as their media hub and share full 1080p Blu-ray-quality video via the built-in HDMI port with other devices, such as a high-definition big screen TV or monitor. Dolby Mobile technology completes the entertainment experience with heightened audio.

One of the tablet’s most impressive features is its ability to run and play premium HD arcade games and complex online games. The 10-point touch display and six-axis motion sensing gyro meter control guarantees an entertainment experience on par with the best game consoles. Plus, the Acer Iconia Tab A500 comes with two full versions of leading games already on it. “Need for Speed: Shift” gives customers a sense of exhilarating speed and power as they “steer” the ultra-responsive tablet to maneuver through courses with dynamic HD graphics. In “Let’s Golf,” customers choose their character and swing for a hole in one on a variety of courses from around the word in vibrant color.

Taking along hundreds of books and magazines is easy with the Acer Iconia Tab A500. The tablet supports eReading and comes pre-installed with Acer LumiRead and Google Books eReading apps for enjoying eBooks, while Zinio is pre-installed for reading full-color digital magazines.

The technology in the Acer Iconia Tab A500 delivers a thrilling level of performance. It features a dual-core NVIDIA Tegra 250 Cortex A9 1GHz processor, supported by the ultra-low power GeForce graphics and 1GB of RAM for blazing mobile performance. It also supports flash.

The new tablet comes with an integrated 16GB of flash storage for programs and apps to give customers incredibly fast access while limiting weight and noise. The platform can support a larger storage capacity of 32GB, which is planned for future models. The Micro-SD card reader supports up to 32GB Micro-SD cards, so customers can access and download their own digital content, including videos, movies and eBooks.

The Acer Iconia Tab A500 can be used in a range of environments thanks to its ambient light sensor. The integrated accelerometer provides auto-rotation between portrait and landscape modes for viewing movies, websites, games and more.

Staying Connected and On-the-Go
Today’s customers are connecting with their social networks in a real-time way that brings more meaning and convenience to their lives. The Acer Iconia Tab A500 connects to Wi-Fi networks with reliable Acer InviLink Nplify 802.11a/b/g/n Wi-Fi CERTIFIED wireless technology at home and on the go for updating social network apps, Twitter feeds and accessing the Internet. Customers can also set up multiple email addresses in the tablet and even open and view Microsoft Office documents using the trial version of the “Docs to Go” app to boost their productivity.

The two webcams boost customers’ ability to stay in touch. The 5MP rear-facing camera has a flash and is auto-focusing, so it captures excellent video and images. The 2MP fixed-focused front-facing webcam is ideal for video conferencing and recording HD video and comments for YouTube and Facebook. Customers can utilize the built-in GPS with various apps to enjoy navigation and location-searches while traveling and driving. Plus, the integrated Bluetooth allows consumers to connect the tablet to a variety of other devices, such as headsets and printers.

Customers will enjoy extra-long uptime with their Acer Iconia Tab A500. The system’s two 3260 mAh Li-polymer batteries provide up to eight hours of playback for casual games, eight hours of HD video playback and 10 hours of WiFi Internet browsing.

Superior Mobile Browsing Experience with Android 3.0
The advances in Android 3.0 (Honeycomb) build on the leading-edge performance in the Acer Iconia Tab A500 to deliver a mobile experience unlike anything customers have experienced to date. Specifically optimized for a tablet environment, Android 3.0 runs on the Acer Iconia Tab A500 to deliver superb browsing with an array of features that make online time rewarding and productive.

Plus, customers can get even more out of their Acer Iconia Tab A500 by customizing it with Android apps of their choice from the Android Market and other Android-based app sites.

Innovative Design Boosts Usability
The Acer Iconia Tab A500 will be used in a very personal way, so it was designed with great attention to detail. Customers will enjoy using it as a primary connection to their world from wherever they take it. The design boasts an Alpine Silver brushed metal aluminum chassis that is cool to the touch and comfortable to hold. The design’s upscale look and feel features a high-gloss finish decorated with engraved patterns that create a subtle sophistication.

Acer offers several options for customers to further personalize their Acer Iconia Tab A500. They are:
· The full-sized dedicated keyboard connects to the tablet via Bluetooth to boost productivity. MSRP is $69.99.
· The dock with IR remote securely holds the Acer Iconia Tab A500 into a secure position with two tilt angles. The dock charges the unit and includes a connection for an external speaker or headphone. MSRP is $79.99.
· The sleek protective case guards the tablet without adding weight or bulk. It allows access to the connectors and ports, while also propping it up in two positions while on a desk or nightstand. MSRP is $39.99.
· The Americas power adapter set comes with the four connectors used in North, Central and South America as well as the UK and Europe. MSRP is $29.99.

clear.fi for Digital Media Sharing
Acer clear.fi is installed on the Acer Iconia Tab A500 to connect it with any other DLNA-compliant device to quickly and easily share digital media. Clear.fi automatically connects all Acer devices on a network (smartphones, notebooks, desktops, HD media players and storage devices) and then gathers and organizes media files by type (video, music, photo, pre-recorded TV).

About Acer
Since its founding in 1976, Acer has achieved the goal of breaking the barriers between people and technology. Globally, Acer ranks No. 2 for total PCs and notebooks. A profitable and sustainable Channel Business Model is instrumental to the company’s continuing growth, while its multi-brand approach effectively integrates Acer, Gateway, Packard Bell, and eMachines brands in worldwide markets. Acer strives to design environmentally friendly products and establish a green supply chain through collaboration with suppliers. Acer is proud to be a Worldwide Partner of the Olympic Movement, including the Vancouver 2010 Olympic Winter Games and London 2012 Olympic Games. The Acer Group employs 8,000 people worldwide. Revenues for 2010 reached US$19.9 billion. See www.acer-group.com for more information.

© 2011 Acer America Corp. All rights reserved. Acer and the Acer logo are registered trademarks of Acer Inc. Other trademarks, registered trademarks, and/or service marks, indicated or otherwise, are the property of their respective owners. All offers subject to change without notice or obligation and may not be available through all sales channels. Prices listed are manufacturer suggested retail price and may vary by location. Applicable sales tax extra.
###