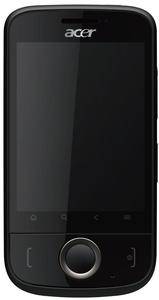 Late last year Acer promised to deliver more Android handsets in 2010, and considering they only pushed out a single model in 2009 that isn’t exactly a difficult challenge they’ve set themselves.  Details on the first new device have now emerged, courtesy of the Bluetooth SIG: the Acer E110.

Confirmed specifications are scant right now.  The E110 will have dualband UMTS/HSDPA (either 900/2100MHz or 850/1900MHz, suggesting both European and US AT&T availability) together with quadband GSM, and obviously we’re expecting Bluetooth (with A2DP support) as well.  Then there’s GPS and AGPS, together with a touchscreen.

Other than that it’s a mystery, but with Mobile World Congress 2010 just next week there’s a fair chance we could see the Acer E110 make its official debut.