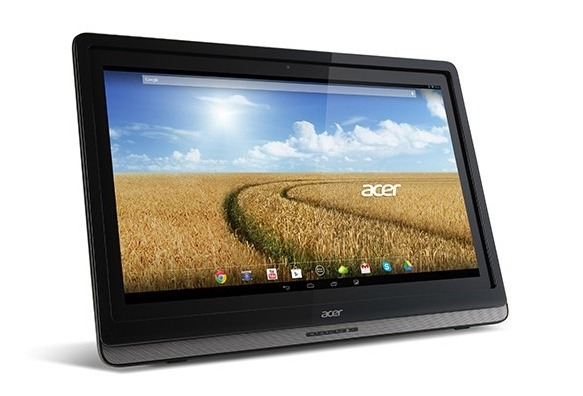 Acer had three products to announce this morning before showing off their lineup at IFA in Berlin. Along with a new 6.0-inch smartphone and a standard tablet, we’re now getting a look at their more unconventional offering in a 24-inch PC aiming to bring Android into your family computer room. With 4.2.2 Jelly Bean and multi-user accounts, this all-in-one PC is quite interesting.

This isn’t the first large-format AIO PC we’ve seen the past year running Android, and back in February Acer revealed their first device in this new market segment. However today’s new Acer DA241HL has beefed up the specs, added a quad-core Tegra 3 processor and 1GB of RAM, as well as a few other nice additions.

The Tegra 3 is currently in the first-gen Nexus 7, and a few other mobile devices, but Acer is bringing this multi-use processor to the PC segment. With a 24-inch 1920 x 1080p HD display and full access to the Google Play Store (or “Google Market” according to their press release) this is a unique device that can do it all.

The display tilts from 20 degrees to 75 for optional viewing angles. Then the addition of MHL out for a second display output, USB, and even HDMI in allows for a lot of options. You can even stream your Windows 7 laptop or Win 8 PC/tablet to the 24-incher using that HDMI input. So it’s actually quite flexible in terms of what you can do.

This 24-inch 1080p quad-core packing Android all-in-one PC will reportedly be available this October, and will run approximately €429 and up, with some options for storage and the likes. We’ll be sure and find it on the IFA floor for a few pictures and video.