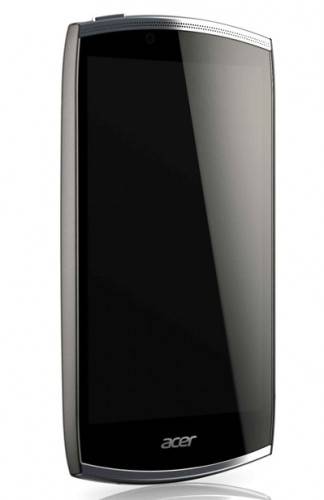 Today ACER has unveiled at least some of their plans, and a new smartphone we can expect to see at Mobile World Congress later this month. Meet the Acer CloudMobile, and yes that will be its name. They have announced both the smartphone, and their new cloud mobile service today and we have a few details below.

The new Acer CloudMobile will rock a 4.3″ HD screen and be powered by Android 4.0 Ice Cream Sandwich. While we still don’t know all the details on the rest of the specs we do have a few photos and are hearing they’ve won a few IF design awards for said device. We can expect to see the results of their designs, and the final specs later this month. With a thin bezel and brushed aluminum around the phone you can clearly see from the photos the phone is oozing with style.

You can see from the images above the phone is extremely thin. Hopefully coming in under 8mm thick to compete with current smartphones. The camera looks large and will most likely feature an 8 megapixel sensor. We even have Dolby Digital (Mobile) on board with the branding plate on bottom. Currently Acer hasn’t revealed any other specs or details but will fully announce the phone at Mobile World Congress 2012 in Barcelona Spain later this month. We’ll be there live to capture the details so stay tuned at our MWC 2012 Portal.