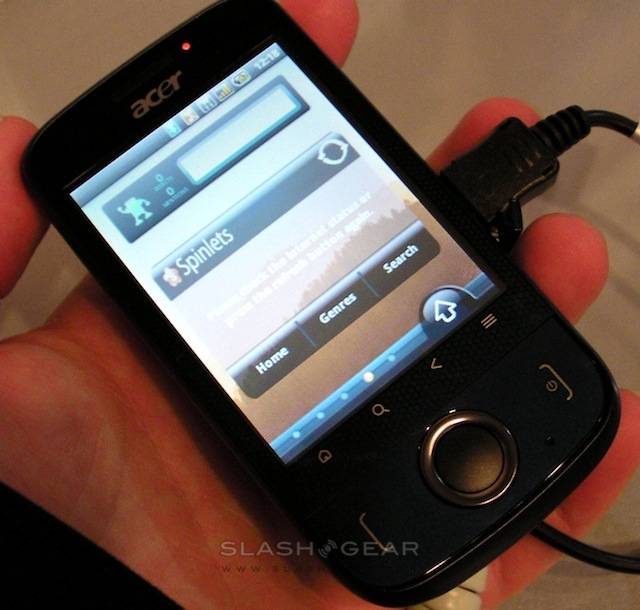 Acer’s new flagship Android smartphone may be the Snapdragon-powered Liquid e, but the company has two other new devices hoping for some time in the limelight too.  The Acer beTouch E110 and beTouch E400 offer Android 1.5 and Android 2.1 respectively, and we stopped by the company’s booth at MWC 2010 this week to grab a quick play.

It has to be said, neither device is especially inspiring.  Acer have modified the beTouch E110’s UI with an alternative app draw and some new iconography, but when you consider that other devices in their range are several OS-versions further down the line it’s something of a compromise.  Still, the phone feels compact and reasonably sturdy, and reminded us of a chubbier HTC Tattoo.

The Acer beTouch E400, meanwhile, has a design we actually prefer to the bulky Liquid e, though there’s a broad expanse of somewhat wasted space underneath the touchscreen with only a distinctive illuminated Home button to brighten things up.  Still, it proved responsive and the touchscreen worked well, and it’s a relatively thin device.

Solid, safe choices then, but neither Acer prompted the same sort of excitement as, say, the HTC Legend.  If the company prices them right then they could stand a chance, of course; those sort of details will have to wait until the official launch, expected to be March 2010 for the E110 and April 2010 for the E400.