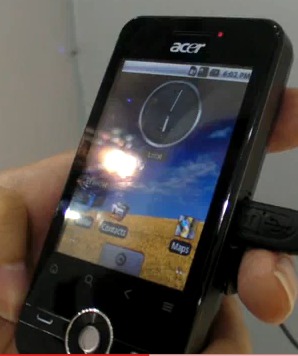 Don’t be alarmed, the title is similar to the last but it isn’t the same story (not exactly). This is another Android 1.6 device by Acer that has been recently announced at this year’s Computex. This version shares a few things in common with the E130 as you will see later.

This device features Android 1.6, a 2.8 inch resistive touch screen, and a 3.2 MP camera. Like the beTouch E130, it has a similar ST Ericsson 416Mhz processor but lacks a keyboard. There’s also a 3.mm jack, micrSD slot and an optical track pad. Both of these devices in the beTouch series have 256 RAM and 512 ROM. It seems both of these phones can come in either T-Mobile or AT&T compatible 3G bands, it’ll be interesting to see where they land.