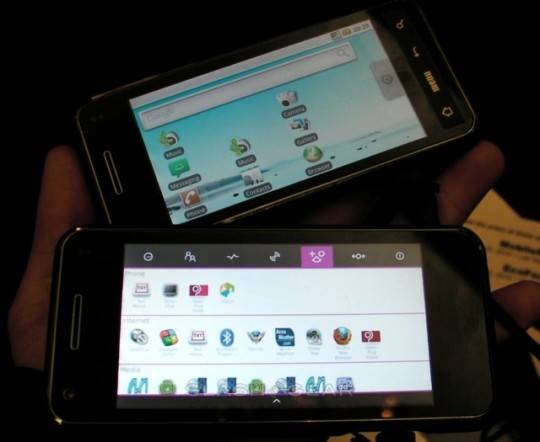 More hands on video’s from SlashGear. This one comes in the form of Intel’s second Android based MID, based on the upcoming Atom-series Moorestown processors. This MID features a touchscreen, WiFi and 3G, along with the usual sensors – GPS, accelerometer, digital compass – and both front and rear facing cameras.

This device comes in an Android and a version of Moblin. They maanaged to get time with both version and made two hands on videos that are coming up. These are not finally production builds so there still is some work to do.

When they asked the Intel rep what sets this apart from their competition from NVIDIA or TI, the rep stated:

“Their stance is that Moorestown brings with it flexibility – greater flexibility to run various platforms, including those intended for ARM and x86 systems – and of course as well as Android and Moblin there’ll be MeeGo support when that OS arrives later in 2010. Moorestown will be capable of running in a low-power mode for regular smartphone duties, or in a high-power (comparable to a netbook-style devices) mode when you need some processing or multimedia grunt.”

These look like some amazing devices and hopefully they will hit the market soon.