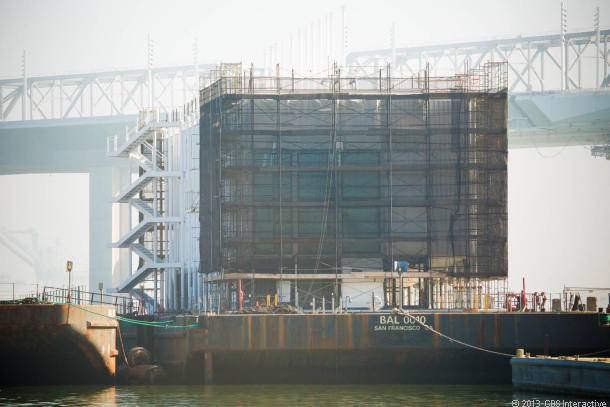 If you like speculation, try this on for size. A giant, floating something has been spotted in the San Francisco Bay Area. Some are speculating that it’s Google in nature, and could be a floating data center. While no clear ties to Google are present, speculation persists.

To begin with, Google was granted a patent in 2009 for a floating data center. This is definitely floating, so we’re halfway there. Data centers can be housed in shipping containers as well, and this thing is massive — just like a google data center.

As CNET points out, the barge and building it was built in are leased by a company named By and Large LLC, which has suspect origins. They have no real presence on the web, and no projects of note. This seems to be their one and only foray into… well, anything. The lease on Hangar 3 — where this all originates from — was signed by a Mike Darby and Kenneth Li. Darby tells CNET he has no affiliation with By and Large, while Yi was unavailable. The point of contact for By and Large LLC was a man who’s number led to Google, but was disconnected.

Then again, it could be something else, like something from the X Labs. It could be a data center to coincide with Project Loon, or simple Google trying to “go green” by using the ocean to water-cool and power a data center.