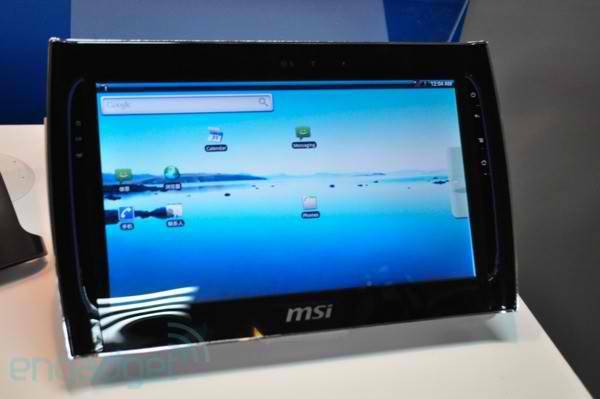 This little beauty goes by the name, WindPad 110. It is a 10-inch Tegra 2 Android powered tablet manufactured by MSI. It runs Android 2.1 and hopefully it will make it to the market soon. But for various reason devices powered by NVIDIA’s Tegra 2 processors seem to get delayed for various reason so there might be a bit of a wait for this to be released.

Whenever this does become available it will retail for $399 which isn’t a bad price if they can load it down with some great specs. All we know about it now is it has a 10-inch capacitive touch screen, Wi-Fi, Bluetooth, USB ports and will have some form of video output. We’re keeping our fingers crossed for 1080p capabilities with an HDMI 1.4 port. This is a very stylish and sleek device, we’ll update you when more information becomes available. There’s a short video over at Engadget, nothing is really demoed and it’s an early prototype but it worth taking a 60 second once over.