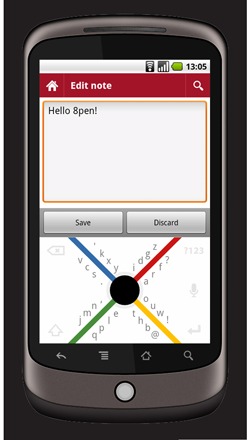 Some people are displeased with their current touchscreen keyboard on their Android device; annoyed with auto-correct or it takes too long are the common excuses I hear. Well, a company called 8pen wants to make you more comfortable typing on a touch screen with their app.

This keyboard is different than all the others. We have yet to try it out yet, but it looks like it will separate itself from the rest by the looks of it. It looks confusing, but once you get used to it I’m sure it will be a breeze. The 8pen keyboard is gesture-based, which is similar to the Swype keyboard used on some other phones. Swype allows you to drag your fingers across the keyboard without having to continuously peck at the screen with your finger. It is also different from Swype in that it doesn’t have the traditional keyboard layout, but more like a square that is split up diagagonally like shown in the picture above. In the meantime, check it out and let us know what you think. You can also watch their promo video below as well.
Via [8pen]
[youtube]http://www.youtube.com/watch?v=q3OuCR0EpGo&feature=player_embedded[/youtube]