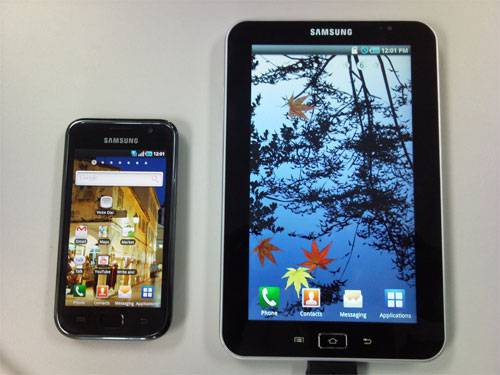 Yesterday we told you That Samsung has an Android MID in the making that is supposed to rival the iPod touch. Well, that product may still be in the pipeline but a photo of an iPad challenger has just emerged. This photo was leaked on Samsungs South African Twitter page.

Samsung is calling this device the Galaxy tablet. And like its iPad counterpart, it’s just a bigger version of the Galaxy S. it has the same 3 keys at the bottom, and the same front facing camera. This is a good looking tablet and knowing Samsung, this should make it to the market soon unlike all the tablet prototypes we’ve seen in the past.

This tablet is said to be running Android 2.1 and have the same version of TouchWiz as the Galaxy S, TouchWiz 3.0. There is no word on if this has been optimized for use on a tablet but I assume that it would be. There is no word on addition specs but like most Android tablets, expect it to have more features than the iPad.