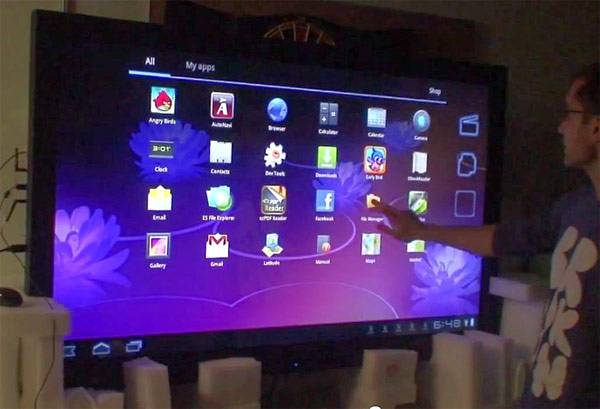 How big is too big? Currently tablets top out at about ten inches, but if you’d like something a little more gigantic,  at least one Turkish company is willing to give you what you want. Ardic Technology is running a full Honeycomb interface through a 65-inch 1080p television – that’s 1920 x 1080 pixels, to most Honeycomb tablets 1280 x 800. The prototype is one of a kind for the moment.

There’s a lot of work put into this modification, between boosting the resolution, outputting the video and getting the touch input to work on a remote display. The results are impressive to say the least: it really is a lot like a gigantic Honeycomb tablet, with full multi-touch support and working games, like Fruit Slice. And all it takes is a Tegra 2 processor and 1GB of RAM – that says a lot for the scalability of Android. How does a 1080p panel in your next (normal-sized) Android tablet sound? The custom-built system uses a standard tablet (looks like a Galaxy Tab 10.1 or XOOM) in a dock, with near- instantaneous switching.

Check out the video below for some impressive performance:

Obviously this sort of setup isn’t ready for the mass market yet, but the implications are fascinating. If you watch the video you’ll see that the operator isn’t actually touching the screen, he’s using some sort of motion tracking or infrared system. So if Android runs this well in a fully functional five-foot interface, what’s to stop Google from building all these features into the next Google TV? Heck, why can’t your Tegra 3 tablet be your Google TV? The possibilities seem ripe for gaming as well, with Kinect-style games being the obvious goal.

The company is planning on building an improved model soon. We’ll be keeping an eye on their progress – especially if they plan on selling them!