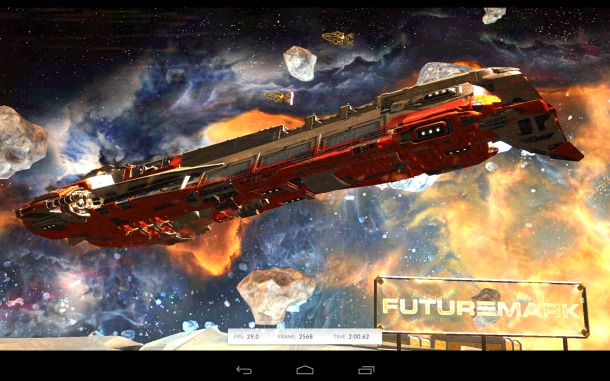 If you’re a fan of benchmarking Android devices so you can compare their performance, the app you have been waiting for is finally available to download. Futuremark has finally made 3DMark available for Android users, so it’s time to get that latest kernel and start overclocking. The new version is also available for Windows 7 and Windows 8 as well.

Futuremark plans to offer a version of the software for iOS and Windows RT in the future. The mobile test platform in the new application is called Ice Storm. In this test, users will see a science-fiction spaceship battle over an ice planet. The 3DMark score is derived from the results of three individual tests.

One of those tests is designed to stress CPU performance while the other two are made specifically for GPU performance. The Android app allows tests to be run at 1280 x 720 or 1920 x 1080. The images are scaled to the device’s native resolution. The first of the graphics tests is an overall triangle throughput test that throws out about 530,000 vertices into the average frame.

The second graphics tests focuses on pixel processing and includes post processing effects such as particles, blurring, and high dynamic range. The physics test is designed to stress the CPU forcing it to make numerous physics calculations. 3DMark usually focuses on graphics, and that trend continues here. The application is available for Android 3.1 and higher. Get it today but as a fair warning the application is nearly 253MB in size.