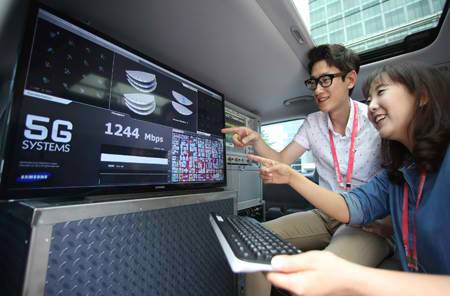 While some countries still struggle actually getting 3G or 4G connectivity from their service providers, apparently, the age of 5G is almost upon us. Well, that is, if you live in South Korea. A 12-man delegation from their Ministry of Science, ICT, and Future Planning went to the meeting of the International Telecommunication Union (ITU) in San Diego, and based on their suggestion, the organization agreed to define 5G as a 20 gigabits per second network.

The technical name of the 5G network has also been agreed upon as IMT-2020 (3G was IMT-2020 and 4G was IMT-Advanced). It will refer to any network that can give users more than 100 megabits-per-second on an average data transmission to more than a million devices within one square kilometer. In layman’s terms, you can download one movie, and in ultra high-definition mode at that, in just 10 seconds. And those video content services that have holographic technology will be able to function on this kind of network with its expanded data capacity.

It was also discussed during the meeting that they will be targetting 2020 as the year when the 5G network will be available commercially. So they will start asking for applications for technology that can be used as a standard for the network. Both the ITU and South Korea are looking at showcasing the technology during the 2018 PyeongChang Winter Olympic Games.

KT Corp, one of South Korea’s largest telcos will be the official sponsor of the Winter Olympics and will be the one to demonstrate just how fast 5G will be. Last week, KT announced they will finally be commercializing their Giga LTE, giving you speeds of 1.17GBps. which is already 15 times faster than their current LTE. Now, just imagine how fast 5G can be and you might want to immediately move to South Korea.

VIA: The Korea Times