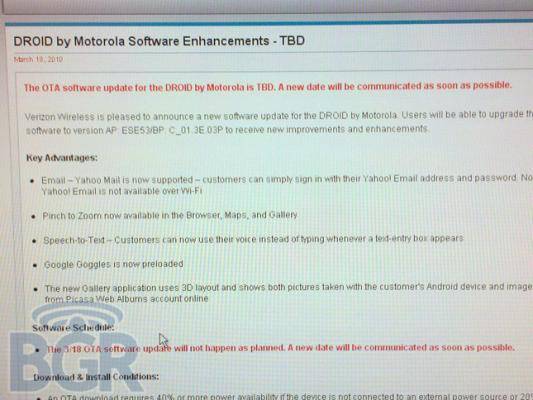 The other day we uncovered an official document form Verizon that outlined the 2.1 update for the Droid. This update was supposed to be send out today via OTA. Now it’s has been delayed until further notice.

The guys over at BGR acquired this screen shot that shows the update has been delayed. Droid users have been waiting on this day since it was announced and it looks like the wait continues. We Cliq users pretty much expected this, a Cliq update was sent out around a month ago then it was quickly pulled due to “technical difficulties” then when it finally came it bricked a few devices. It seems as though Motorola doesn’t quite know how to administer updates to their Android devices and this needs to be addressed real soon.