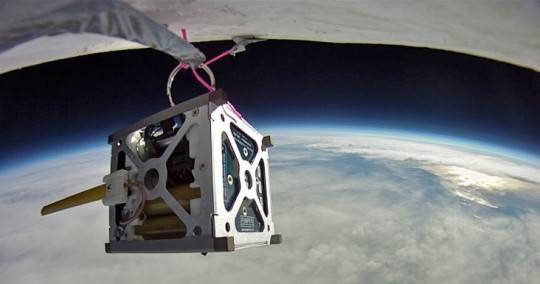 One thing is for certain: you can’t stop science. NASA has sent another small satellite into space, and this one is made from Nexus S parts. They’ve done this before with great interest and success, but this one has a few tweaks under the hood to make it even more interesting. This time, we’ll get the chance to listen in.

The first few PhoneSats sent into space had the goal of taking pics of Earth, which we’ll call macro selfies for now. This time, NASA has cobbled in radios, allowing anyone with a radio capable of transmitting at 437.425MHz to communicate with the device. We’re not sure just what we’ll be able to discuss or ascertain; it could just be NASA transmissions and chatter.

The program is an attempt to curb spending and launch low-specced satellites into space. With the aim of bringing it in under $10,000, NASA has come in well under budget, building the PhoneSat 2.4 to space for around $7,500. It also uses off-the-shelf components, so if you had a way to launch one, you could build one yourself.

The device will spend a full year in space before being de-commissioned and falling to Earth. If you think you’re going to get a piece of Android space memorabilia, think again. The PhoneSat will burn up on re-entry, leaving virtually no trace of the program at all. The original shots weren’t the best, but they were pretty great for what amounts to shots of our planet from space with an old smartphone.