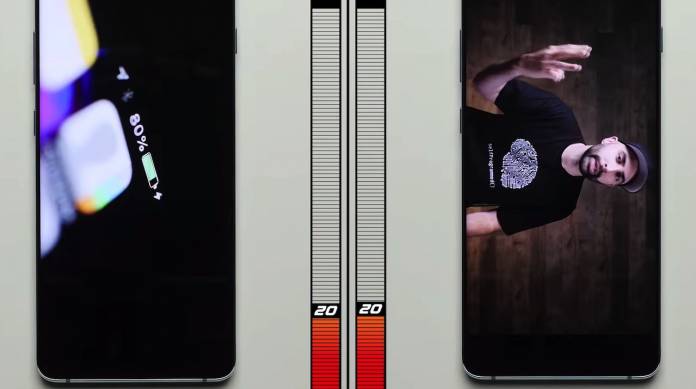 What is the point of having a super hi-resolution display when you’re only going to lower or adjust its settings because you want to save battery? That is a legit question that got us thinking after watching a battery test video from PhoneBuff recently on YouTube. He’s the tech vlogger who has previously shown us several videos like the Samsung Galaxy Note 10+ VS iPhone 11 Max Pro Drop Test, HTC 10 vs Samsung Galaxy S7 Drop Test, and the Samsung Galaxy Note 7 vs iPhone 6S Drop Test and Speed Test.

David Rahimi (@PhoneBuff) has managed to test two Samsung Galaxy S10 Plus with the same specs and features. Only one phone has been adjusted to show a 1080p display compared to the default hi-res screen. The idea is that the two will be used in the same way and process but with the different display settings. We’ll then see if there is a difference in how the batteries are used in drained.

The goal is to see which one will die first. The early guess is that the one with the better display resolution (1440p) will be drained first. Watch the video below:

The first test has the two phones “chatting” with a chatbot. After two hours, the results were only down to 84% for both of the units.

After another two hours of “playing” Alto’s Adventures, there was a difference in battery performance but only by one percent—60% and 61%. That’s not a lot.

Using Google Maps for navigation for two whole hours even brought the two devices at the same level—42%. When YouTube binge-watching for two hours, both are down to 20%. So there seems to be no difference at all.

PhoneBuff did another set of tests on two Galaxy S10 phones and the results are the same. After two days, the phones died at almost the same time with only a few seconds of difference.