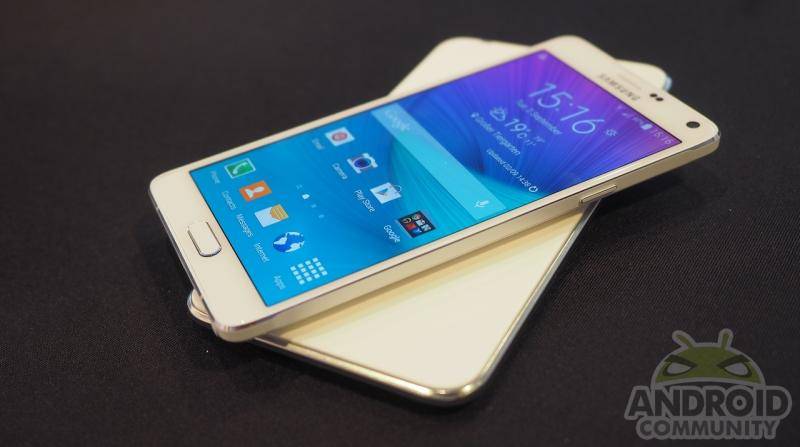 It is no secret the star of Samsung‘s IFA 2014 show is the Galaxy Note 4, with many expectations hinging on the company’s next S Pen-toting phablet. Good news for Sammy fans: it does not disappoint. The Galaxy Note 4 indeed delivers the promise of a top of the line device, the evolution of three generations worth of stylus-bearing smartphones.

The most noticeable change in the Galaxy Note 4 is its design. While it still bears that faux leather back cover, pretty much everything else has changed. Taking a cue from the recent Galaxy Alpha, Samsung has given the Galaxy Note 4 a dash of metal on the edges. The beveled design might make some cry “Apple ripoff”, but one can’t really deny that it indeed gives off a more premium aura. From the outside, you can immediately see what’s new: a heart rate sensor at the back.

Above that heart rate sensor is the rear camera, which has also changed, upgraded to a 16 megapixel sensor, now with Optical Image Stabilization. But perhaps more interesting this time is the front camera. It may not be the 5-megapixel camera of some more selfie-centric smartphones, but this 3.7-megapixel shooter has some tricks up its sleeve. First is the f/1.9 aperture that promises to take in 60 percent more light so your selfies will still look nice even in darker conditions. And while the default camera mode here has a 90-degree angle, it can be switched to capture a wider 120-degree panorama. Perfect for group selfies, or wefies as some might call it.

The display of the Galaxy Note 4 is as expected. It hasn’t increased in size, still at 5.7 inches. But now it boasts of a resolution of 2560×1440. It still uses Super AMOLED, too, which means a bigger range of supported colors as well as the distinctive Ultra Power Saving Mode that Samsung has been flaunting since the Galaxy S5. The screen curves just a wee bit at the sides, adding to that premium look and feel of the device. Deep inside the device, we get to the core, of course available in two configurations depending on the market. On one side we have a quad-core Qualcomm Snapdragon 805, clocked at an impressive 2.7 GHz speed. In the other corner sits the Samsung Exynos 5433, an octa-core chip that, by now, probably needs no introduction when it comes to benchmarks.

Geeking out over hardware aside, the real point of the Galaxy Note line is, of course, the S Pen, and this is probably where the most significant improvements lie. While doubling the sensitivity levels of the S Pen is almost expected, adding tilt and speed tracking is a most pleasant and welcome surprise. In theory, this puts the Galaxy Note 4 almost on par with professional graphics tablet that also tout such features, except you won’t have to carry around a slab with you. But such a stylus would almost be useless without the supporting software ecosystem. Samsung has once again update its S Note app for this new generation. Fountain pen and Calligraphy pen take advantage of the new features of the S Pen. Smart Select lets you temporarily collect selected text and images into a folder for easy sharing. And “PC Mouse” mode makes it easier to highlight and select text. There’s also a new S Note widget with shortcuts for typing text, scribbling notes, or recording voice memos. But perhaps more interesting is the Snap Note, which lets you take a photo of a physical notebook and S Note will do all the straightening and cleaning up to distinguish text from images. Unfortunately, S Note still can’t search through handwritten text, putting Evernote still ahead of the competition.

With all this power, you would presume that it will put a drain on the battery. While there’s no changing the laws of physics, Samsung does have a few remedies available. Aside from the Ultra Power Saving Mode already mentioned, there’s also Fast Charging here. Samsung claims that its research revealed that users charge their devices for only 30 minutes at a time, so it made sure that the Galaxy Note 4 will get up to 50 percent charged within than time frame. As for how to charge the device, you have the option of going wired, with USB 2.0 this time instead of 3.0, or wireless with the optional Qi compatible back cover.

As to availability, pricing and dates are still unannounced and will of course vary by market. Color options will range from the usual Charcoal Black and Frosted White to the somewhat new Blossom Pink and never before seen Bronze Gold.