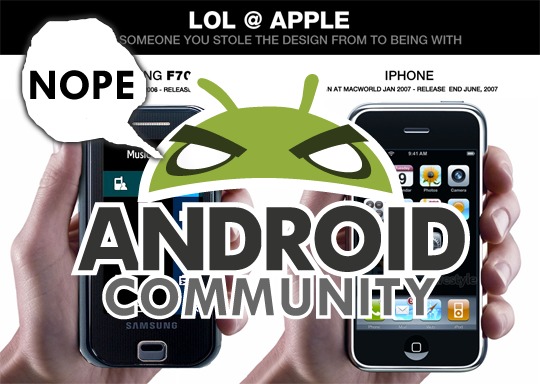 This has been a pretty large story over the last few days. Apple is suing Samsung basically for stealing their iPhone design. A photo appeared showing what is the Samsung F700 claiming it was before the iPhone, and that has started a little firestorm of discussion. Both our sister site SlashGear and all of us here on Android Community have it out for incorrect factoids, thusly here come the dogs – onward, to truth!

This picture above says the F700 was shown at CeBit 2006, and then released in 2007, making Apple and the iPhone the one that copied them. This is completely false. We here love Android, not Apple, but this is a interesting story and I just felt like sharing either way. Even if Apple is in the right. According to the picture the F700 was introduced in 2006, and Apple stole the design. I’m not going to get to deep on this, but the F700 was never seen until February of 2007 and our very own slashgear had it completely covered. This is AFTER Apple announced and showed the world the iPhone January 9th 2007 at MacWorld.

We can go even deeper here also. The photo above mentions that the Samsung F700 was “shown” at CeBit 2006, that is wrong it was 2007. Here is the hard proof.

Here is SlashGears Vincent Nguyen live at Cebit 2007 on March 15th getting a look at the phone, at the end of the video he says an exclusive look is coming next.

Here is the next video, and it shows some hands-on of the F700 looking very much like not-final-hardware, or software for that matter. It barely worked. If they had been working on it since 2006, wouldn’t the review model at Cebit 2007 work better than this video below. You’d think so.
https://www.youtube.com/watch?v=wMuC0vDNlQo

We can even go back to February 7th 2007 with iphonebuzz showing the F700, and mentioning it as a copy, and a possible competitor to the iPhone, clearly after the iPhone. When you really get down to this stories deep roots, it looks like in the beginning Apple had the design and Samsung tried to copy it, but failed miserably. You might also be asking that if the F700 was shown at CeBit 2007, Samsung was certainly working on it well before that during 2006, and that is before the original iPhone got unveiled. So did Samsung have the design first and Apple steal it. We don’t know, but this is some pretty hard evidence. Here is another piece of information for you, the orignal iPhone used many Samsung parts, so the question remains – was Samsung privy to some sort of reference design? Or was Apple privy to some sort of reference design?

Either way it takes way more than a month or even 3 to get a design made up and tested and some review models out. Most likely years. Vincent from Slashgear visited the Apple testing facilities and they even told him most devices take around 2 years to develop and test. Although Apple does seem to test their devices more thoroughly than others. So who started first, who knew what. This is all for you the reader to decide. I’ve already spent way to much of my Android time on this Apple story, so I’m going to leave you with one final piece from iphonebuzz. It is a FCC filing from Apple in October of 2006 about the iPhone, asking for confidentiality regarding many details and documents about the iPhone. Meaning they had been working on it long before that. 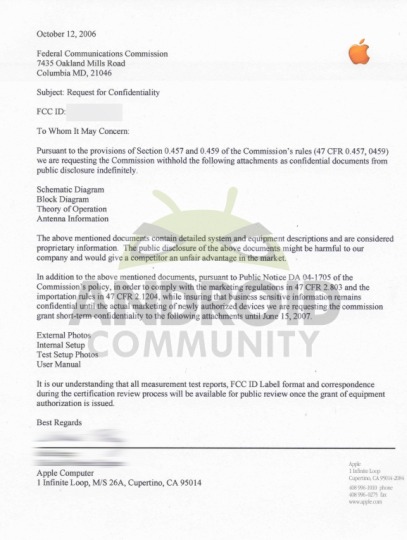 So what do you all think? Is Samsung going to get their pants sued off? Tell us below in the comments.