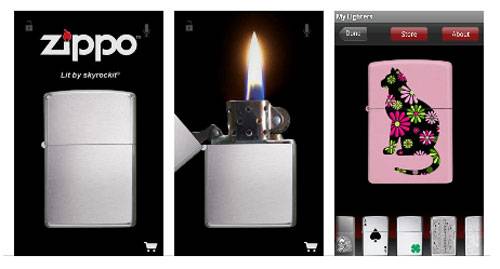 I can remember when I was a kid and we would go to the movies, the Bic lighter commercial would come on and everyone would hold up their lighters and flick them. You can’t do that today, but if you are the sort that finds the need to flick a lighter and you don’t smoke Zippo has a new Android app for you called Virtual Zippo Lighter.

The app has been on the iPhone before and has been downloaded about 14 million times. The app is now on the Android Market and it is free. It is optimized for the Droid, Evo 4G, and HTC G2 according to Zippo. It’s doesn’t seem overly complex so I would think it will run on any Android device.

The app has 28 different designs that you can put on your virtual lighter. As you move your Android device around the flam will move with you and when you blow on your phone the flame will go out. It’s an interesting app, even if it has no real purpose.