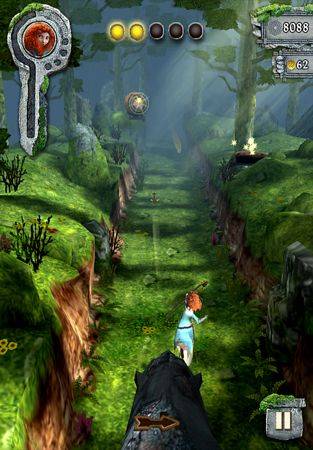 Whoa! If you’re a fan of Temple Run or Disney we have some awesome news this afternoon for you. Disney’s Pixar and Temple Run creators Imangi Studios have partnered up on an all new game for Android called Temple Run: Brave. This is essentially Pixar’s new film ‘Brave’ meets Temple Run. Bringing everything we love about the extremely popular game to our phones with a twist.

Brave is the upcoming animated movie by Disney’s Pixar Films and looks to be similar to the popular series Shrek. Temple Run has been extremely popular on both iOS and Android, and has millions and millions of players. Temple Run: Brave will be more than just a visual makeover too. Instead of running from Angry demon-monkeys it will all be themed around Pixar’s movie Brave with angry bears instead.

Merida is the red-headed main character in the movie, and will be the star of the new game. Along with a complete visual overhaul Brave will also have exclusive new features. Merida will have her trusty bow and arrow in a new Archery section that will tie-in closely with the movie. Everything in terms of actual gameplay seems to be almost identical other than the visual changes and the new bow and arrow. For now we don’t have too many details but the new and exciting Temple Run: Brave will be available on the Google Play Store come June 14th, most likely for free. Enjoy the game trailer below: