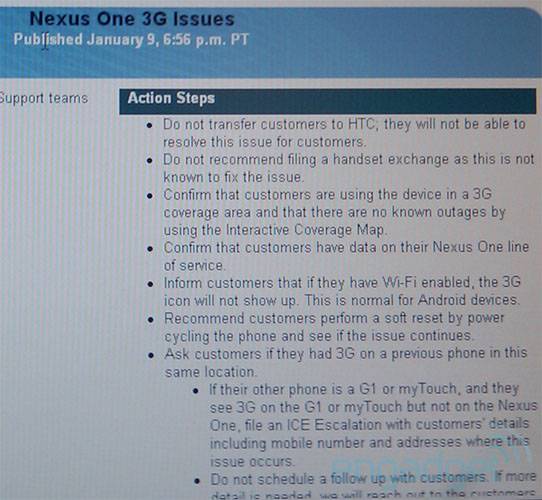 As most of you already know, there are many Nexus One owners that have some kind of signal issue with their Android devices. The complaints have to do with the handset switching between 3G and EDGE, and sometimes getting stuck on EDGE-only.

The folks over at Engadget got their hands on some “internal documentation” that T-Mobile is giving to its reps, so they can help Nexus One owners on the signal issue. As you can see on the image above, T-Mobile’s reps will begin with the basics; checking that you actually are within 3G coverage, verify that customers have a data plan and so on.

The reps will also ask if you had 3G service on a previous phone (assuming you had T-Mo’s service on the other handset) in the same area. It is worth mentioning that one of our readers (NPS_CA) actually took matters into his own hands, and went on to investigate the issue around his neighborhood and found out his Nexus One does have a problem with 3G signals. You can read his findings here.