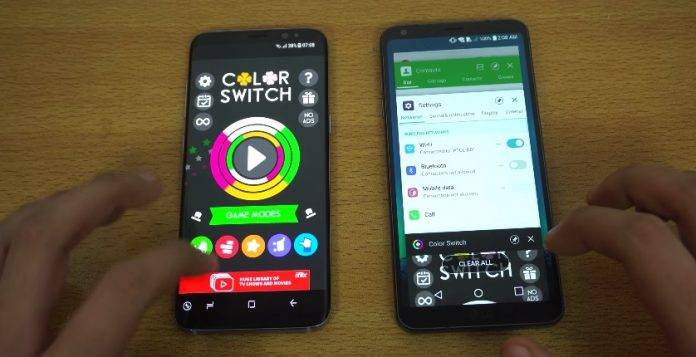 When it comes to doing Speed Tests, we turn to XEETECHCARE. The last one we featured was the comparison between the Google Pixel XL and Samsung Galaxy S7 edge. Actually, this YouTuber doesn’t busy himself in just speed tests. He also performs water tests, drop tests, and Coke freeze tests. He has already pitted this year’s top premium flagship rivals from South Korea: the Samsung Galaxy S8 and the LG G6.

After several stress tests on the LG G6, we can expect similar videos featuring the Galaxy S8. So far, the LG G6 is doing really well passing JerryRigEverything’s Durability Test and How2Tech’s Stress Test. It’s also been dunked, frozen, and thawed earlier. Read our LG G6 Review for our take on the smartphone. As for the Samsung Galaxy S8, we have yet to review the phone because it’s still not available in the market.

Watch the video below and see early on how the Samsung Galaxy S8 responds to clicks and swipes compared to the LG G6. In some instances though, the LG G6 is faster so the two are really neck-on-neck.

For this Speed Test, our geek compared an Orchid Grey Samsung Galaxy S8 and a black LG G6 connected to the same WiFi network. In booting up the phone, the S8 is noticeably faster. Note that the two have different processors. Samsung used the latest Exynos 8895 while LG decided on the Snapdragon 821 instead of the S835 which is also found in some Galaxy S8 units.

Everything is closed up in the background. Launching the call function is faster on the Galaxy S8 but opening the Setting menu is faster on the LG G6. Opening the popular Color Switch, the S8 is ahead by a few seconds. Next game is Gun Fu which also opened first on the Samsung phone but really close. These other apps also opened first on the Galaxy S8: Tinder, Snapchat, Instagram, Twitter, Viber, Smash Hit, and Subway Surfers. Launching took some time on Instagram and Subway Surfers.

Opening the camera, speed is about the same. Interestingly with the browsers, the LG G6 is ahead in opening Wikipedia as the first website and then Apple.com. RAM management tells us the phones are very close in the speedtest game. Reloading the apps is almost at the same time.

The Samsung Galaxy S8 may be faster but the LG G6 comes really close which is still very impressive given its processor is from last year.