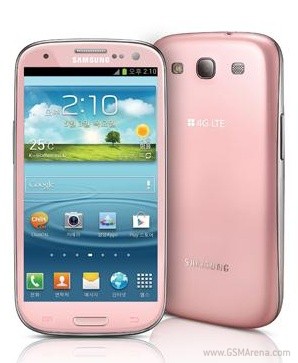 We all love to add a little personality to our smartphones, whether it’s through a special case or just the color of the phone itself. If pink just so happens to be your favorite color (I know it’s my favorite color), you’ll be happy to know that Samsung unveiled a pink-colored Galaxy S III. An intimidating phone never looked so weak.

Samsung certainly loves their colors, though. They announced four new colors for the S III back in August, and today they have announced the most manliest of colors, which brings the total color count to seven (the other colors being Marble White, Pebble Blue, Amber Brown, Garnet Red, Sapphire Black and Titanium Grey). Was I naming off Bob Ross colors just then?

The pink Galaxy S III will hit store shelves in Korea next week, but we have yet to hear word on whether or not it will be coming to the States. Then again, I would find it hard to believe that Samsung would hold back on the pink version and not make it available before Christmas or even Valentine’s Day.

If the pink version did eventually end up hitting Stateside, do you think you would get one? Maybe buy one for the Mrs.? Personally, I think pink is a fun color and it would definitely enforce the whole “real men wear pink” philosophy, but I don’t know if I’d want a device that I use constantly and every day to be glowing pink. Just my personal preference, though.