Ladies and gentlemen, we are now entering a time of unsurpassed phablet craziness and the push for bigger screens on devices as Samsung officially unveils a 7-inch (!!!) phablet in the Galaxy Tab Q. The device is officially under the “Tab” – which ostensibly pertains to tablets – family, but see here, the Galaxy Tab Q is also a phone! The device was launched in China this weekend.

Samsung is clearly pushing its own definition of what a phablet is – and yes, the company expects you to use this 7-inch beast as a phone. It has an earpiece and a built-in microphone, so we assume that Samsung wants you to bring this up to your face with your hand and make calls the standard way. We’re having doubts if we can.

This device was initially launched in South Korea as the Galaxy W, and now it’s hitting the stalls of stores in China with its 7-inch 1280×720 high definition TFT screen. Under the hood, it has an unnamed 1.2Ghz quad-core processor and a decent 1.5GB of RAM to push applications and pixels. It has an 8MP shooter and a 2MP front-facing cam. Notably, it has a 3200mAh battery to correctly power that gigantic HD screen. 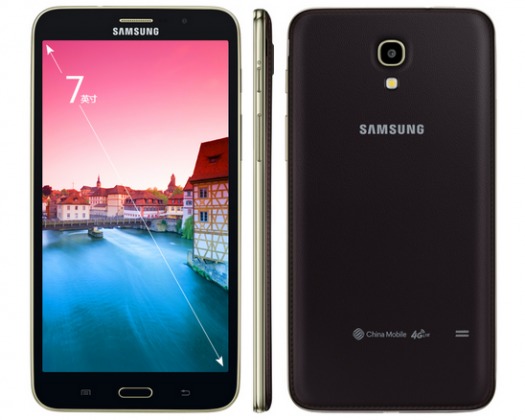 More importantly, the Galaxy Tab Q is 4G/LTE capable via a micro SIM card slot, which confirms that fact that it is indeed intended to function as a phone. The device is clothed in the same faux leather as the Galaxy Note 3, and while there is no info on internal storage capacity, the device is expandable to 64GB via microSD. There is also no info on what Android OS it will be carrying, but rumors say it would be Android 4.3 Jelly Bean. Having renamed this for the China launch, there might be a possibility that the huge phablet will again be renamed when launched for other markets.