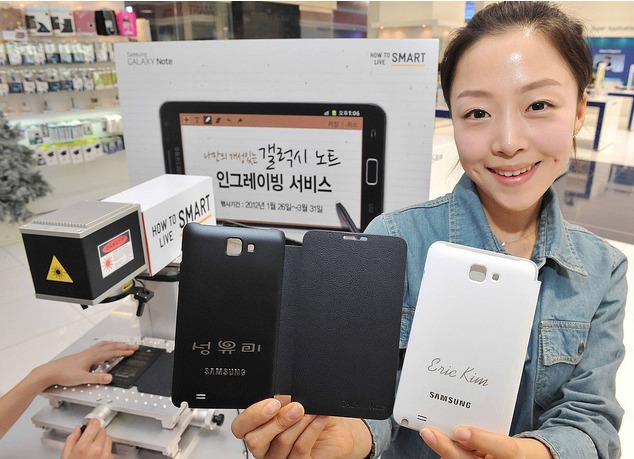 Samsung is looking to take things up another notch and have introduced personal engraving options for their new and popular new Galaxy Note smartphone. According to Samsung’s official Flickr page, buyers in South Korea can now get personalized custom engraving with their purchased from now until March 31st at select Samsung locations. Nice touch Samsung!

Samsung isn’t the only one offering this unique option and the folks over at Apple have had this same thing for years. Offering custom laser engravings on iPod and iPads for as long as I can remember. Is Samsung taking another play from Apple’s playbook just because they can? Or will Apple start another lawsuit for this too?

A popular option on Apple.com this type of customization hasn’t been seen in the world of Android but Samsung may be looking to change that. Whether this will be available to multiple devices and locations isn’t yet known but for now it’s only available for South Korea and the Galaxy Note. Now you can get the impressive 5.3″ AMOLED display rocking Galaxy Note smartphone with a personal touch or “note” right on the back for your loved ones. Too bad we can’t do this stateside because it would make a great gift for Valentines Day — especially with the AT&T 4G LTE Note launching February 19th.