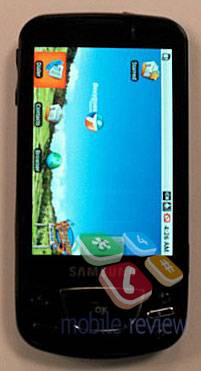 It may only have been officially announced this morning, but already the first live photos of the Samsung I7500 Android cellphone have emerged.  Mobile-Review grabbed some hands-on time with the AMOLED touchscreen handset, confirming that HTC’s Magic may have some competition when it comes to attractive Android devices.

The Samsung I7500 measures 115 x 56 x 11.9 mm, though the company has not confirmed the handset’s weight.  As you can see from the gallery below, Samsung have squeezed in a 3.5mm headphone jack on the top panel, which will come as a pleasant surprise for anyone frustrated by HTC’s proprietary audio connector.

The microUSB port is also on the top, while along the left-hand side there’s a volume rocker.  On the right-hand side are what look to be a camera and a voice-control shortcut, though the photos are too blurry to say exactly.  More on the Samsung I7500 here.

Live hands on video demo of Samsung i7500 Android phone: