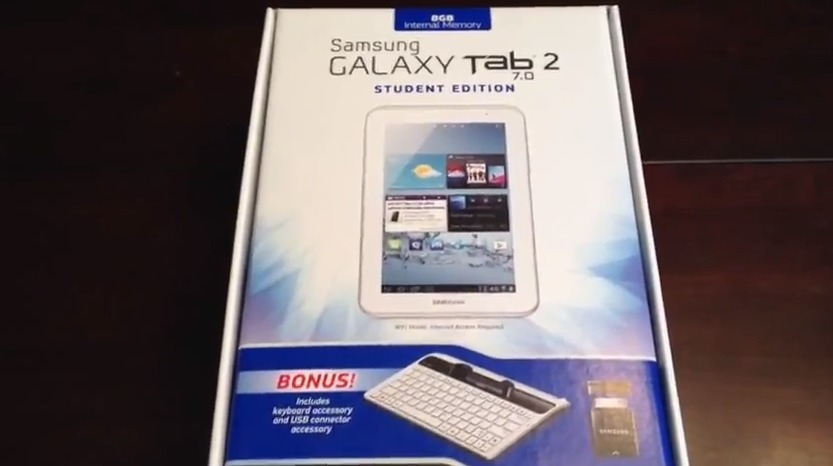 Last week we reported on a rather impressive deal from the folks at Best Buy. This deal contained no less than a 7-inch Samsung Galaxy Tab Android 4.0 Ice Cream Sandwich tablet, a USB adapter, and even a keyboard dock all for the low price of $249. Now it looks to be in stock, and some stores are already selling this excellent back to school deal. Check it out!

It’s being called the Galaxy Tab 2 Student Edition, and contains a Galaxy Tab 2 7-inch tablet, running a dual-core processor, 1GB of RAM, SD card, camera and Ice Cream Sandwich. Basically similar to the Nexus 7 only not as powerful, and a little behind the OS times. This is actually an excellent deal considering the tablet initially debuted for $249. Now you can get this entire bundle for the same price. It was supposed to be available on the 19th, but could be available starting today.

According to Phandroid one lucky reader already found them “in stock” and for sale at Best Buy, and $249 got him the awesome Student Edition back-to-school bundle below. He was kind enough to do an unboxing video too. If you’re interested in this deal from Best Buy and Samsung, have a look.

This is Samsung’s latest Android tablet, coming in at 7-inches. It doesn’t have Jelly Bean or a quad-core processor like the Nexus 7 but it’s super thin and has full micro-SD support and even a rear camera. The video above should have shown you all you needed to know. They’re offering this student edition with the tablet, and a 30-pin to USB adapter, as well as a Bluetooth keyboard dock and stand. Pretty good deal if you ask us. Full specs on the Galaxy Tab 2 7-inch can be seen below, as well as our previous coverage.

Head down to your nearest Best Buy and pick this great deal up today. Enjoy!