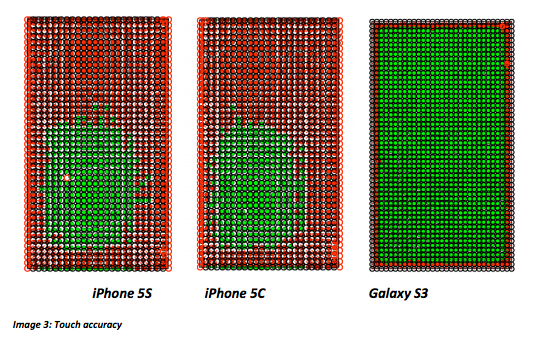 In our tech world, newer is almost always advertised as better, even if the truth is a bit different. Such might be the case in a new experiment that shows the newly launched iPhone 5s and iPhone 5c squarely beaten in terms of touch screen accuracy by Samsung‘s old flagship, the Galaxy S III.

That last sentence is bound to ruffle the feathers of Apple supporters, but the claim isn’t without some amount of scientific backing. The experiment was performed by OptoFidelity, a Finnish company that specializes in test and measurement automation, particularly in machine vision and digital imaging systems, including touch panels. The test involved the company’s Touch Panel Performance Tester and a robot arm that touched the devices at specific points on their screens.

The results showed the the iPhone 5s and 5c performed quite equally and equally bad. Failure rates on Apple‘s latest smartphones increased around the edges and near the top. The Galaxy S III on the other hand, had an almost uniform accurate performance across the middle area of the device. It was not perfect, however, and had some errors near the edges, similar to the iPhones. As a consequence, touch input via the virtual keyboard was also more accurate on the Samsung smartphone, resulting in a better typing experience.

The results of the experiment, if one give credence to it, is quite interesting due to the fact that the Galaxy S III is more than a year old and definitely does not sport the latest technology. It is curious, however, that OptoFidelity did not test the latest iPhone models against the slightly older but still more recent Galaxy S 4.