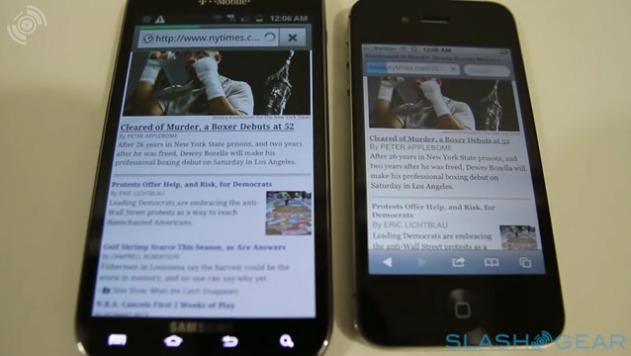 The iPhone 4S is finally here and while we don’t have a 5 to compare things to, we do have the 4S to throw up against the Samsung Galaxy S II for a few browser load times and overall performance tests as I’m sure plenty are interested in seeing the results. I always told myself I’d never use the word “iPhone” in a title here at Android Community but this isn’t about me — its for you, the readers. A little friendly competition is always nice right? Because where would we all be without it — probably still using Nokia candy bar phones daily. Enough of that, check out our video below.

Now I’m not going to get too crazy here or break down all the little things about Android or iOS, iPhone 4S or Galaxy S II, instead I’ll just show you all the video by our sister site and good man Vincent from SlashGear. Your humble narrator (me) wouldn’t be caught dead with an idevice so we’ll just have to take Vincents word for it. First off he compares the iPhone 4 to the iPhone 4S in a browser test or three just for fun and to see how well the new A5 dual-core processor chugs along in the “S”, then he moves on to the good stuff — Android. The first attempt with the Galaxy S II he doesn’t hit go, so don’t get discouraged and break anything just yet, watch the entire clip.

Update: New video with Flash set to On Demand

I myself am not in control of the testing here, but from initial results the iPhone 4S performs quite well, I’m sure everyone expected that as the original held its own pretty well too. One of the fastest processors around currently, the 1.5 GHz Qualcomm in the Galaxy S II performs very well but is just barely by a hair beat by the new A5 dual-core iPhone 4S in most tests. I’d rather have the SGSII perform 1 second slower and have a full flash experience personally. We could argue about this all day, flash or no flash, or try other sites but when it really comes down to it iOS is highly efficient as is Android — not to mention many many websites are designed with iOS in mind.

This is just one prime example that we don’t need blazing fast quad-core processors and huge 4.7″ displays to have an awesome experience. I can’t see myself browsing the web and reading websites with that puny little 3.5″ display, but that is just me. Android has came a long ways over the past few years and is growing daily. The rapid growth and development of the entire ecosystem is just one more reason to be completely excited about things to come. The iPhone 4S may slightly be faster by a tiny hair at the moment, but wait for those quad-core processors to start hitting the streets and this will be an entire different story. I know I mentioned we don’t need the quad-cores, and we still don’t, but I sure would love to have one.

In the end both sides will remain extremely competitive, they will drive innovation and Samsung and Android will continue to rise and rise. Do take note that Android 2.3 Gingerbread is well over a year old, and iOS 5 was just released. Once we get the newer, bigger, better, and faster Android 4.0 Ice Cream Sandwich powered Samsung Galaxy Nexus I’d love to run these tests again and see who’s boss (and we will).

For now we’ll just have to agree that while they didn’t release a newer and bigger iPhone 5, Apple’s done a decent job with the new iPhone 4S. Apparently there is more to it than just the S so the upgrade kit I was planning to sell pictured below might not work after all. 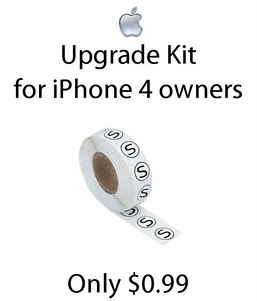 What do you think of the video? We would love to see your comments in the appropriate section below.