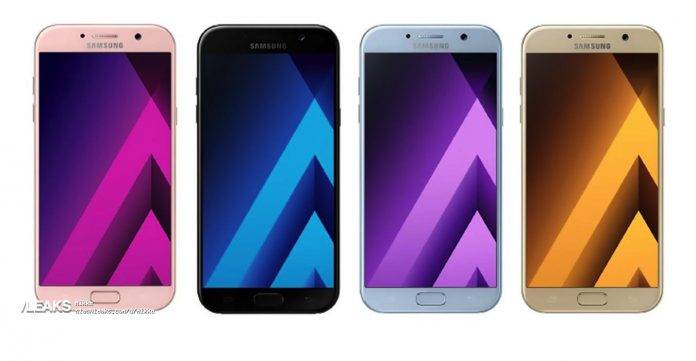 The Samsung Galaxy A5 2017 version has been leaked earlier this month together with the Galaxy A3 and Galaxy A7. We even saw that hands-on video and the renders as early as October. We also learned of the idea that the phone would be available in four colors such as pink, black, blue, and gold. True enough, the Galaxy A5 (2017) will be arriving very soon and in four different hues according to this latest leaked image.

The latest leak we sighted includes information on the specs. So far, we know the Galaxy A5 will be equipped with a 5.2-inch FHD screen, 1080 x 1920 resolution, 1.8GHz octa-core Exynos 7880 processor, Mali-T860 MP4 GPU, 16MP rear and front-facing cameras, 32GB onboard storage, 3GB RAM, Type-C USB port, and a 3000mAh battery. The device will only have Android 6.0 Marshmallow out of the box and not Nougat.

No information on exact availability but we’re guessing the phone will be unveiled before this year ends or perhaps next week at the CES. Phone measures 145 x 71 x 7.8mm and may be available for only 2699 Yuan which is around $388. It could have a fingerprint scanner at the home button plus IP68-certification so it can survive being underwater for 30 minutes up to ten feet.