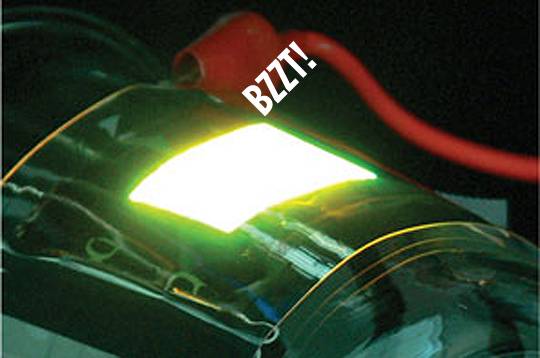 Behold, the Quantum Leap of our time! Researchers over at Samsung Electronics have been making a full-color display with none other than the elusive technology called quantum dots. What the heck is that all about? Quantum-dot displays, they say, are not only cheaper and more energy-efficient than the LCD displays found in today’s common devices, they’re brighter too! Samsung currently has a four-inch diagonal display whipped up that uses an active matrix, that is, each of its quantum-dot pixels is controlled with a thin-film transistor, and the entire prototype is made of flexible plastic so it can bend with ease!

But what are quantum dots, you ask? They’re semiconductor nanocrystals that glow brightly when exposed to light or current. Depending on the material and size of their form, they glow different colors. Because of the pureness of their color tied to the fact that the power they consume is relatively low compared to today’s mass produced methods, they’re bound to become a hot commodity in the next few years. But how much more power does an LCD screen use than a quantum-dot display? About 5 times as much. And what else could there possibly be to add to this simple equation? Quantum-dot displays are going to last longer than LCD screens and will cost less than half the amount of money to produce!

This technology is good, but still isn’t as powerful as OLED. Why not just keep using OLED? Cost. It’d cost a large amount more to produce OLED displays on a large scale than it would to produce quantum-dot. Also at the moment the quantum-dot technology combo being used isn’t quite up to spec: only lasting around 10,000 hours before these displays begin to lose brightness. Seth Coe-Sullivan, cofounder and chief technology officer of QD Vision, a fellow quite familiar with the goings-on in the business of creating quantum-dot displays, says the technology is around 3 years away from real implementation.