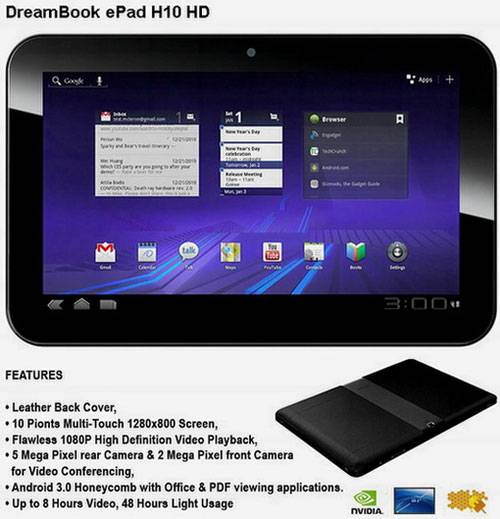 I am not sure why Pioneer computers decided to give the DreamBook ePad H10 such a long name. Quibbles about the name aside the little tablet might be interesting to some folks shopping for something different than the mainstream offerings. The tablet will run Android 3.0.

It has a 10.1-inch screen with a resolution of 1280 x 800 and has a dual-core Tegra 2 processor inside. That should mean the little beastie is able to fight the Xoom and Galaxy Tab 10.1 on seemingly equal footing. The unveiling was made in Australia where it will hit in the middle of April.

The price in AUD is $699, which works out to about $705 here. Aussies are used to being hosed on pricing of gear and any of them will tell you that the price we pay here in the US is often much cheaper than the straight conversion price. I hope that will be the case when/if the DreamBook lands here or else it won’t do well.