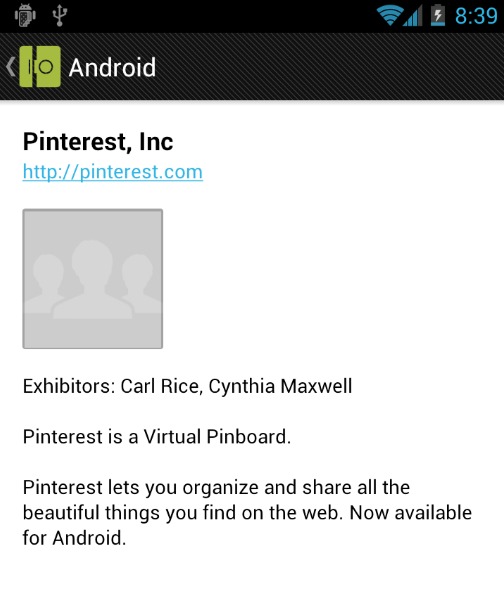 It looks like Pinterest will finally be coming to Android soon, possibly even this week at Google I/O. The hugely popular social site has continued to rise in popularity (mainly for women) and after AusDroid went digging through the Google I/O app they found them to be one of the exhibitors.

Pinterest is a pinboard-style social network and sharing site where you’ll find all sorts of things from food, meals, dresses, women’s clothing, and anything else you can think of. All you ladies of the DROID can start sharing everything with your Pinfriends soon. Here’s the screenshot that was found of the app:

It’s listed as “Now available for Android” hinting toward the fact that we very well could see it on the Google I/O exhibit floor along side an actual release to the Play Store. At the same time many of the developers that show up to I/O are working on projects that aren’t quite ready yet. Either way it appears that Pinterest will be arriving for Android soon. Hopefully iOS users don’t treat this the same way they treated all the Instagram users back when it launched for Android. Stay tuned for more details on Pinterest and Google I/O while we are live on-site.