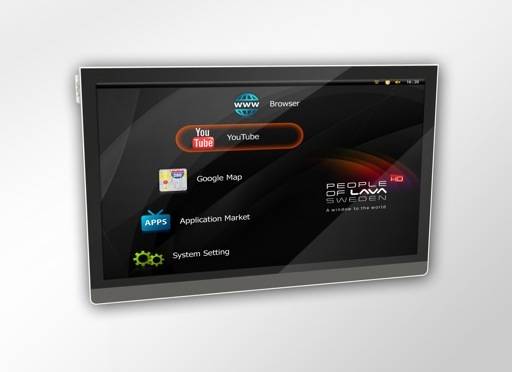 Google has plans to introduce an Android integrated television. We’ll, looks like they were beaten to the punch by a Swedish company. People of Lava’s Scandinavia Android TV is a 42-inch Full HD 1080p set with three HDMI ports, a DVB-T digital TV tuner and USB port. It also features an 833MHz ARM Cortex A8 processor and it run Android 1.5.

Like many Android handset this television has a custom UI called “Scandinavia Window to the World”. They also will create their own app store specifically made for this television. The usual Android based apps included are YouTube, Google Maps, Weather, Time, Calendar and App Store access. You can also control this TV with a keyboard, the included wireless remote or possible even USB peripherals. The 42-inch Scandinavia will be followed by 47-inch and 55-inch versions. Head over to Slashgear for a full picture gallery.