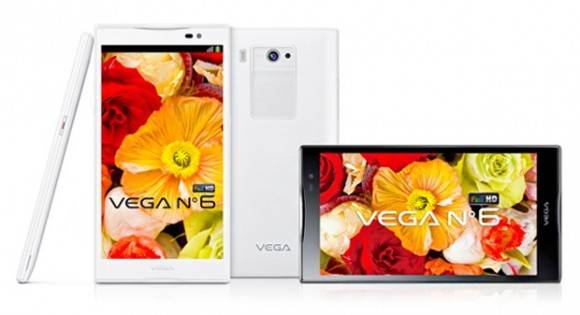 Pantech has officially announced their latest smartphone, the Vega No. 6. Except, given the size of the display some may prefer to call this a phablet. Names aside, the Vega No. 6 is on the larger size and will arrive sporting a 5.9-inch display. Along with the display (which is Full HD), the Vega No. 6 will have a large battery and a 13 megapixel rear-facing camera that is said to be capable of recording full HD resolution video at 30 frames per second.

Kicking the specs off with the display, aside from being nearly six inches in size it will have a resolution of 1920 x 1080. Other goodies include a quad-core 1.5GHz Qualcomm processor, 2GB of RAM, 32GB of internal storage, microSD card slot, 3150 mAh battery and a 2 megapixel front-facing camera. The handset will also have NFC, Wi-Fi and Android 4.1 Jelly Bean with Pantech’s Flux interface on top.

Another perk of the Vega No. 6 is the use of V Touch technology which has a touchpad on the backside of the device. This will allow you to navigate without having to block the display. Other goodies include LTE connectivity and measurements of 158.6 x 83.2 x 9.9mm. Simply put, this is not a handset that will likely never be described as small.

As of this time Pantech has only announced availability for those in South Korea. The Vega No. 6 is expected to arrive for sale next month and it will be available in two colors — black and/or white. Bottom line here, the Vega No. 6 appears to be an interesting enough device, but will likely not see a widespread global release.