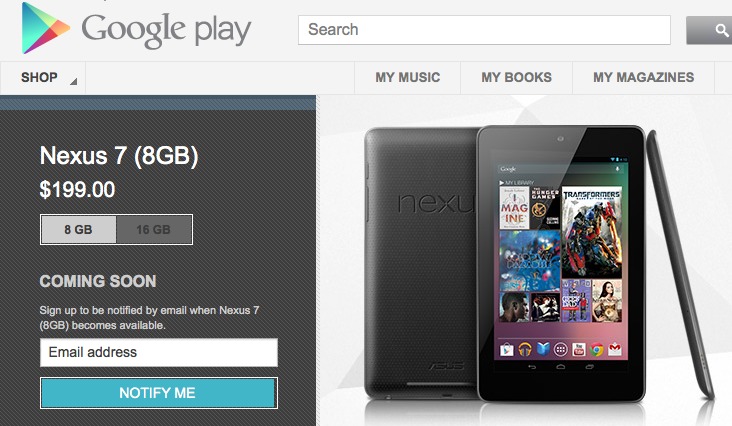 While we don’t know exactly what type of sales numbers Google and ASUS have seen with their new Nexus 7 tablet, we expect them to be great. With such an amazing device all for the low price of $199 how can it not sell? After it sold out just about everywhere initially back in July, we are now seeing it sell out on the Google Play Store too.

As of this afternoon Google has changed the status of their 8GB Nexus 7, and now it’s listed as “coming soon” leading us to believe they’ve sold out. I have a feeling they have no more stock left, and are waiting for ASUS to churn out more units from the factory and get them shipped to buyers. The 16GB version had the same fate early, and then came back a few weeks later.

Currently the 16GB Nexus 7 is still listed as “In Stock” and users that purchase it should be able to get it right away, but the 8GB model appears to be MIA. We’ve seen the tablets estimated ship date be pushed back a few weeks, leading us to believe they were low or out of stock, but now it’s been completely removed. Instead of just saying “shipping in 3-4 weeks” like before, it now says “coming soon.”

It’s safe to say the demand for Google’s Nexus 7 tablet has been overwhelming, and it’s been selling like hot cakes. Sadly Google and ASUS have been silent on any actual numbers. I’d love to see just how many Nexus 7 tablets have actually been sold. I have a feeling the number is quite high, but we won’t know until they break their silence. For now only the 16GB model is available from Google, and we’ll update once we know more.

Update: Now that is just weird. They are now listed back as “In Stock” and are shipping in 3-5 days like before. I think Google might be confused!