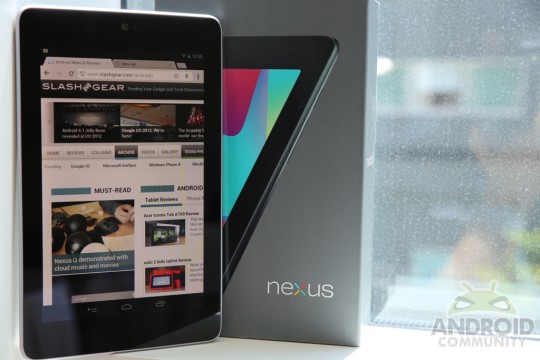 With a lot of attention lately going towards the upcoming LG Nexus 4 smartphone, we can’t forget about Google’s popular Nexus 7 tablet. There’s been multiple rumors pointing to a few different routes Google will take with their tablet. From a 3G capable device, 32GB of storage replacing the 16GB model, and even a $99 Nexus 7. Today however the 3G model has appeared on a retailers website.

According to the folks at BGR, a few different details have surfaced regarding a 32GB 3G tablet with support for both GSM and WCDMA radios. Not only that but the guys over at tabletblog.de even spotted it clearing the FCC equivalent over in Taiwan called the NCC. Sounds pretty legit right?

If you look closely at the image provided above, you’ll notice that third line showing GSM, WCDMA, as well as the usual WiFi, Bluetooth, and NFC. According to sources this has cleared the NCC in Taiwan and the 3G equipped Nexus 7 will only be offered in the 32GB option — which until lately has only been a rumor in itself.

Whatever the case may be, we’ll find out all the details on October 29th in NYC when Google opens the doors for their Playground is open Android event. Not counting the LG Nexus 4, the 29th should be a big day for Google and Android. It looks like we could end up seeing the 8GB Nexus 7 stay at $199, the 32GB being $249, and a 3G model hit that low $299 price point to edge out the looming iPad Mini. Thoughts?