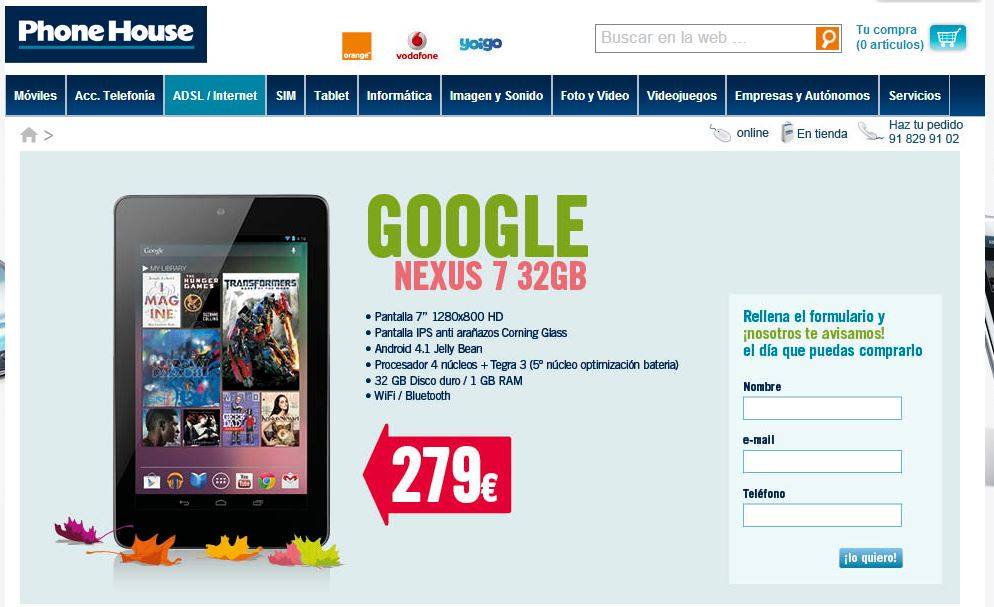 With all of the rumors and leaks that have been happening lately, we’re pretty sure that the 32GB Nexus 7 is an actual thing. For those who remain unconvinced, however, we have a new bit of evidence to share with you thanks to folks Galaxus (via Android Police). The 32GB Nexus 7 is being advertised on Phone House‘s website today, and though the ad doesn’t give away too many details, there are few key points we should be paying attention to.

First off, this appears to be a page where users can sign up to receive more information on the 32GB Nexus 7 in the future. More or less, that confirms the Nexus 7 32GB exists, because Phone House isn’t going launch a promotional page like this if Google hadn’t confirmed the incoming release of the new model. The page also gives us the price of the new tablet – €279, which is a mere 30 Euros more than the 16GB variant sells for.

Hearing that makes it a little easier to believe that Google will replace the 16GB model with the 32GB model. If Google were going to offer both at the same time, we feel like there’d be a bigger discrepancy in the prices of the two tablets. Of course, with no confirmation from Google yet, it’s hard to say what it will do.

In any case, this promotion page is just latest piece of evidence we have for a 32GB Nexus 7. It certainly seems like Google is gearing up to announce this oft-rumored Nexus 7 model, but we’re hesitant to say anything is for sure without any word from Google. Perhaps the big G will reveal this 32GB variant when it announces the new Nexus phone? We’ll be keeping an ear to the ground for new details, so keep it tuned to Android Community for more information!