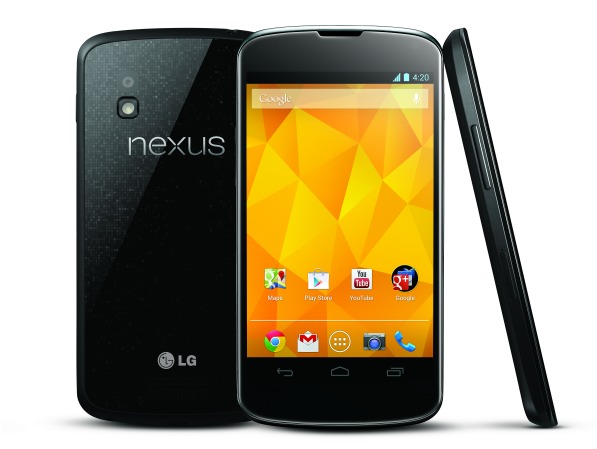 The incoming Hurricane Sandy might have forced Google to cancel its Android event in New York City, but that hasn’t stopped the company from announcing its new products anyway. Google and LG officially announced the Nexus 4, which is Google’s new flagship smartphone and the newest iteration in the Nexus family.

We’re certainly not surprised by the announcement, but we are relieved that it’s finally here. It’s been a rumored device for a while now, but it’s finally official. The Nexus 4 officially comes packing with a 1.5GHz Qualcomm Snapdragon S4 quad-core processor, 2GB of RAM, and internal storage options of either 8GB or 16GB. The device supports 3G and HSPA+, but sadly there’s no LTE support to be found.

You’ll also find an 8MP rear camera with a 1.3MP front-facing camera. No word if it shoots 1080p video, but we’re guessing that it at least shoots 720p. The Nexus 4’s display is a 4.7-inch WXGA True HD IPS Plus screen with a 1280×768 resolution, which gives it a pixel density of 320ppi. Protecting the display itself from destruction is Corning’s Gorilla Glass 2. The Nexus 4 will also include wireless charging as well as NFC capabilities, and will run Android 4.2 Jelly Bean, which was also announced today.

The Nexus 4 will be available in the Google Play store starting November 13 for $299 (unlocked) for the 8GB and $349 for the 16GB model in the US. The UK, Canada, Germany, France, Spain and Australia will also be getting the new phone on November 13, and it will be available in Europe, Central and South America, Asia, CIS, and the Middle East at the end of November. The Nexus 4 will also be available at T-Mobile for $199 after signing a new two-year contract.