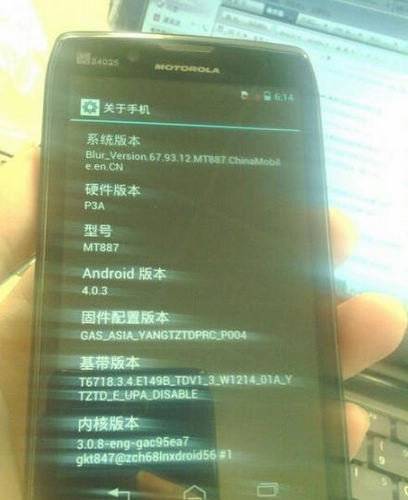 We’re seeing more and more evidence of an upgraded RAZR device coming from Motorola very soon. In addition to the DROID Fighter/DROID RAZR HD sneak peeks, Juggly.cn spotted a new model, the Motorola MT887, hanging out next to a couple of existing devices. The phone has a 4.3-inch screen as opposed to the larger one spotted on the DROID, but comes with an extra surprise: it’s running Ice Cream Sandwich. Connoisseurs take note: this has to be one of the best examples we’ve seen of blurrycam photography!

We’ve seen Moto’s ICS update for Verizon’s DROID RAZR, though they seem content to keep it to themselves for the time being. This software seems to be pretty similar, though obviously it’s using Chinese (the phone has a China Mobile logo emblazoned on the front). Specs match the current RAZRs with the exception of  720p screen: 1.2Ghz dual-core OMAP 4430 processor, 1GB of RAM, 8MP camera and an unknown amount of on-board storage. Due to this phone’s slightly chunky nature, it’s probably using the RAZR MAXX’s admirable 3300mAh battery. Also note what appear to be virtual navigation buttons, though those could be removed by the time of release.

Motorola seems comfortable with releasing a surprising number of phone variants in China, while most other markets just get the local flavor of the RAZR and RAZR MAXX. This being the case, it’s unlikely that we’ll see this particular phone, the “RAZR” MT887, outside of Asia. With Verizon preparing a bigger and probably badder version of the DROID RAZR, this model is likely just an incremental update for Chinese consumers who haven’t bought a RAZR yet.